On the class politics of food 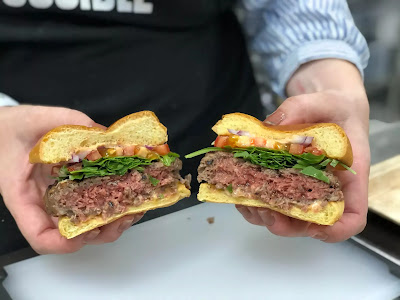 Last Friday night, we tried an Impossible Burger at the local Oak Bluffs ale house. If you've been hiding under a rock (don't altogether blame you), the Impossible Burger is a plant based meat substitute that claims to replicate the appearance, texture, and taste of hamburger.

In my judgment, it came close. I won't be entirely sold on how much it resembles the animal meat til I can buy this stuff and cook it myself. But having eaten one, I'm more open than not to this innovation.

Burger King has given the Impossible Burger a try, and the things sell.

Such a substitute, if widely accepted, would feed people who want to eat beef happily. Its invention is what humans do: figure out new ways to feed ourselves by adapting naturally available inputs in novel directions. That creativity is why the planet supports the human population it does today. It's called civilization.

But the good cultural observers at Vox point out that after a couple of years of hype, all is not happy among some trend setters.

... what the burger did become was mass produced. From one restaurant in 2016, the Impossible Burger is now available in more than 10,000 locations worldwide.

There’s a lot wrong with our food system and there’s nothing wrong with saying so. But opposing all mass-market, mass-produced food is elitist and classist — and in this particular case, it’s silly, too.

Three of the biggest harms caused by our current food system are the harms to the environment, to public health through antibiotic resistance, and to animals through factory farming. In order to address all of those, plant-based or lab-produced alternatives to meat must be mass-produced. And if we’re uncomfortable with the fact of mass-production itself then we can’t fix any of the problems it’s currently causing.

Back when I was in the business of serving free meals to hungry people, I became extremely simple minded about "the politics of food." People should have food. 'Nuff said.
Posted by janinsanfran at 4:47 AM