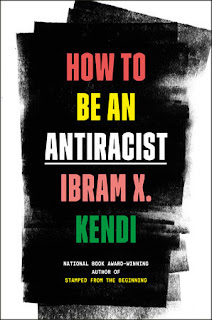 Ibram X. Kendi won a National Book Award in 2016 for his Stamped from the Beginning: The Definitive History of Racist Ideas in America. By profession a historian, he is the founding director of the Antiracist Research and Policy Center at American University.

In his new book, How to be an anti-racist, Kendi explores what it means to live the implications of the intellectual and material forces he has so deeply explored in the previous book. And, a little against his druthers (as I've heard him explain in podcast interviews) he finds his lessons in the life he knows best -- his own. The result is approachable, brave, and sometimes poignant. Since all of us are sometimes racist in Kendi's definitions, he offers multiple opportunities to readers to reflect on our own lives through sharing his personal evolution.

So what are the definitions Kendi offers?

Racism is a marriage of racist policies and racist ideas that produces and normalizes racial inequities.

There is no such thing as a non racist or race-neutral policy. Every policy in every institution in every community is producing or sustaining either racial inequity or racial equity between racial groups.

And there's more that adds the realm of the ideas we carry about within us:

... An antiracist idea is any idea that suggests the racial groups are equals in their apparent differences -- there is nothing right or wrong with any group. Antiracist ideas argue that racist policies are the cause of racial inequities. ...

Out of this framework, Kendi tells his own life story -- and his experience of learning that more and more aspects of experience require him to discern what antiracist understanding and action mean.

He begins with the story from high school of winning a year 2000 MLK Day speech competition by wowing the judges with the then-popular frame that Black youth were dumb, academically lazy, sports obsessed, no-goodniks -- and not having a clue that he'd just promoted a viciously racist set of attitudes that would land much of a generation of Black boys in prison. Today he calls such pronouncements both "racist" and thus bulwarks of racial inequity.

Later on, he recalls dissing immigrant schoolmates, including Black ones from the Caribbean and Africa, with racist ethnic memes. At historically Black Florida A&M University where he went to college, he learned (and unlearned) about the racism embodied in colorism. The stolen Florida vote count for George W. Bush in December 2000 made the Nation of Islam's mythology of a White race of devils seem persuasive -- until antiracist Black history professors knocked him out of it with a more complex story. In graduate school, Black lesbian peers beat unexamined sexism and homophobia out of him, ensuring that his antiracism is rooted in affirmation of the full humanity of women and gay folk.

There were plenty of passages in How to be an antiracist that felt more addressed to Kendi's Black peers than to an old white woman. But there's an underlying theme that accords with everything I've learned over the years about antiracism: what matters is not White soul searching, but actual, material action for changes, policies, and initiatives that make Black lives more equitable. So central to the history of the United States is racism against Blacks, that making everyone's lives more equitable is the usual byproduct of antiracism. We don't get there by self-flagellation. We get there by working collectively and by organizing.

We are surrounded by racial inequity, as visible as the law, as hidden as our private thoughts. The question for each of us is: What side of history will we stand on? A racist is someone who is supporting a racist policy by their actions or inaction or expressing a racist idea. An antiracist is someone who is supporting an antiracist policy by their actions or expressing an antiracist idea. "Racist" and "antiracist" are like peelable name tags that are placed and replaced based on what someone is doing or not doing, supporting or expressing in each moment. They are not permanent tattoos.

Posted by janinsanfran at 5:37 AM