Al-Maliki tries to put out the fire 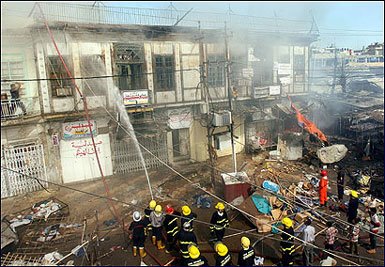 Here's a quick interruption of my series of reports on conversations with Iraqis to comment on breaking news:

Newsweek reports that Iraqi Prime Minister Nouri al-Maliki will unveil a new master national reconciliation plan tomorrow. Expected points include: If true, this is very good news. Unlike just about any of the blather out of Washington from U.S. politicians of either party, the proposal seems grounded in reality as perceived by people in the region -- an obvious prerequisite to progress toward reconciliation and reconstruction in Iraq.

In particular, this plan fits very well with one observation I should make from our trip to the area: no Iraqi we talked with even mentioned Abu Musa Zarqawi and his band of Al Qaeda wannabees as elements in the deteriorating situation. Zarqawi's outfit seems to be a Washington bugaboo, not a percieved factor in Iraq for those who are living there or even nearby.

I'll be posting more stories from the region over the next few days...
Posted by janinsanfran at 9:03 PM