From June 12-20, I was part of a group of U.S. citizen peace activists organized by Global Exchange who traveled in Jordan and Syria in order to listen to people and groups, mostly Iraqi, speaking about the U.S. occupation of Iraq. This post is one of series that will report what we saw and heard. 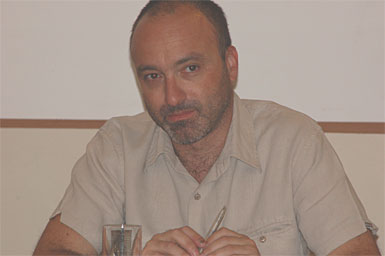 Stefano Alfaro spoke to us of the work of an Italian humanitarian aid project funded by local Italian government (presumably ones not quite in sympathy with former Prime Minister Berlusconi's acquiescence in Bush's war.) Un Ponte Per (A Bridge Across) began its work after Gulf War I and stayed in Iraq throughout the sanctions regime of the 1990s. It only removed its foreign staff after the kidnapping of the two Simonas (Italian humanitarian workers whose rescue was climaxed by U.S. forces shooting the Italian officer who was escorting them to safety.)

Now Un Ponte Per has spread its work throughout the region, supporting local indigenous human rights groups in Iraq, Jordan, Syria, and Turkish Kurdistan. They have many specific projects, for example, supporting the rebuilding of the catalogue of the National Iraqi Library which was burned in the chaos after the invasion. But more generally, they view their role as supporting local groups with technical assistance. 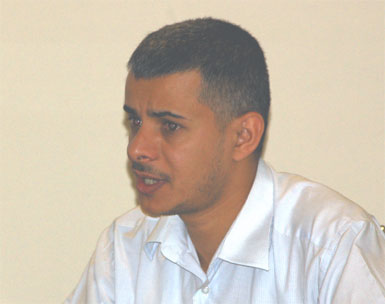 One of these partner projects is Al-Messalla, an Iraqi non-governmental organization (NGO) that tries to build community capacity and encourage non-violence. Its director, Ishmael Daoud described what has been like to try to do this work under occupation.

He explained that right after the U.S. invasion, there was plenty of money for human rights work -- if what you meant by human rights was documenting the abuses of the Saddam Hussein regime. But if you were interested in the current human rights there was no support.

In Daoud's opinion, the real human rights problem in present day Iraq is "the impunity." That is, U.S. soldiers and their contractors are free to operate outside any legal structure without responsibility for any acts they may do against the civilian population. From the beginning

"the soldiers killed people randomly and they just didn't care. .. Each 'mistake' is another person killed. We are bleeding everyday."

He further complained that the U.S. authorities act as if all there is to human rights is holding elections. Iraqis have gained some formal freedoms; in theory he could say anything in Iraq. But he can have no confidence that he won’t be killed or that any authority would hold his killers accountable.

Daoud went on to wonder where all the killers come from? Could they really have so many weapons if the U.S. didn't have a hand in setting up the militias?

His group has had small successes educating Iraqi police and authorities at the local level about the rights of prisoners. But the U.S. controls those it designates "security prisoners" and they have no influence over how they are treated. U.S. forces jail juveniles and women with adult men. Al Messalla particularly fights this practice.

In response to a question, Daoud admitted that prisoners don't tend to turn to NGOs for help -- rather, the harsh conditions of prisons led them to organizing under the auspices of their religious communities.

Alfaro chimed in to explain about how the occupation has undermined authentic human rights work. It is a long-standing principle that humanitarian NGOs must be separate from governments to enable them to navigate among all the parties in societies; a reputation for independence increases their credibility and protects their staff. Beginning with the Afghanistan war, the U.S. military has openly aimed to make NGOs agents of peace-keeping strategy, doling our aid to buy acceptance. USAID, supposedly a humanitarian agency, has an office in the Pentagon; so-called Provincial Reconstruction Teams in Iraq have been under military control and authority.

International humanitarian NGOs are forced to work through Iraqi partners because they cannot protect foreign staff in contemporary Iraq. But Alfaro wanted us to understand that the tremendous challenges of working in Iraq were proving a real opportunity for humanitarian professionals to learn how to better assist projects envisioned and controlled by Iraqis on the ground.

Daoud expressed alarm the new Iraqi government would take its lead not from U.S. words but from the occupation's practice, curtailing freedom of speech and association in the name of security. Conditions in Iraq are not getting better. It is harder to do NGO work in 2006 than it was in 2003. His only glimmer of hope is that it may be possible for Iraqi NGOs to work with United Nations agencies and those of the European Union sometime in the future.
Posted by janinsanfran at 1:24 PM