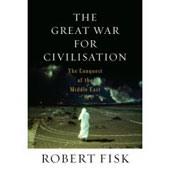 The Great War for Civilisation: The Conquest of the Middle East, by Robert Fisk., published in the U.S. by Random House.

To be honest, I wouldn't have had time to read this 1000+ page tome if I hadn't been waiting for a replacement hard drive while confined to bed with a bad cold. But I was and I did -- and am probably somewhat the wiser for it, though also simply overwhelmed in the history of cruelty, carnage and cupidity that Fisk writes.

Fisk, a Brit, has been a correspondent for 30 years, based in Beirut, first for the London Times, then the Independent. In an excellent earlier book, Pity the Nation: Lebanon at War he pieced together the story of that nation's civil war (1975-1990), a saga of local intrigue punctuated by repeated Israeli invasion and occupation and Syrian "intervention." 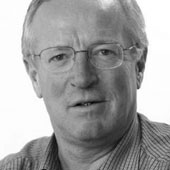 This new volume attempts an almost unimaginable sweep: beginning with the Soviet invasion of Afghanistan; looking back to the European betrayal of their Arab allies in the Versailles settlement after World War I (they promised independence and created colonies); touching on the Turkish genocide of Armenians in 1915; deconstructing the gross power imbalance that has led to naming the progressive destruction of Palestinian hopes a "peace process"; reminding ignorant Westerners of the real Gulf War I (1980-1988) in which Saddam led Iraqis against the Islamic Iranian revolution with support from the U.S. and Gulf potentates, killing some million people in 8 years; rushing west to Algeria whose independence struggle never broke the paradigm of murder and torture; and then back to contemporary hot spots, to suffering Iraqis who endlessly pay the price of grand Western dreams.

It is all so huge and awful, almost more than this reader can bear -- and I've haven't had to live it, except at a voyeur's distance. In this chronicle, the 9/11 atrocities appear at the scale they deserve: terrible crimes, but small and marginal compared with the ongoing horror in the Middle East of which they were a remote epiphenomenon.

Fisk's lesson, insofar as he is willing to derive one, is most un-American. We cannot escape the implications of our histories.

"...Our tragedy lies always in our past, that we have to live with our ancestors' folly and suffer for it, just as they, in their turn, suffered, and as we, through our vanity and arrogance, ensure the pain and suffering of our own children. How to correct history, that's the thing...."

Fisk's opus is going on my bookshelf next to William L. Shirer's classic Rise and Fall of the Third Reich, another historical record of horror and folly by an informed witness that still demands contemporary reading.
Posted by janinsanfran at 11:07 AM

You certainly have a stronger constitution than me. Though I read and admire Fisk in small doses, I can't remember the last time he had anything pleasant to write about.

You also might want to change Versailles and "World War II" to "World War I." It's hard being one's own editor, as I fully know.

Actually, the ME seems to have temporarily broken my constitution; 10 days back and I'm still sick and possibly even time-lagged.