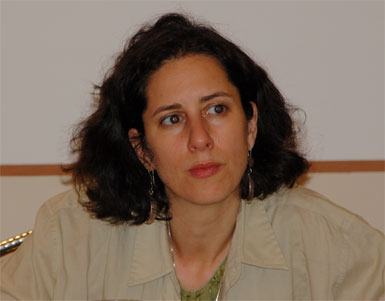 Dr. Najde Al-Ali, a social anthropologist of Iraqi origin who teaches at Exeter University in the United Kingdom happened to be in Amman for a conference while our group was visiting. She offered some insight into the historical experience of Iraqi women, the subject of a book she is currently writing for Zed Books. The key insight I got from her talk is that feminism in Iraq has mostly been an idea used by an authoritarian regime for its own ends. During the oil boom of the 1970s, top down, state-sponsored "feminism" encouraged women's education and work in technical jobs. Then the long Iran-Iraq war, 1980-1988, which killed one million people, altered the gender balance in society to a female majority as well as promoting a militarized culture. Gulf War I and the sanctions that followed fell heavily on women as the regime propped itself up while leaving it to women to sustain families that had lost access to imported foodstuffs and medicines.

Top down, state-sponsored feminism made an unsustainable bargain to obtain women's labor in a society which sent many men to die in its wars; it brought women into public life but left family law, based on religious dictates, undisturbed. When insecurity under occupation pushed women out of employment, legally-based protections for women collapsed. This has nothing to do with "backwardness" or the particular dictates of Islam; it is a function of a false women's "liberation" that aimed to serve society's needs, not those of women themselves.

Al-Ali presented a time line of Iraqi women's status something like this: Iraqi women have never yet been the leading voices deciding what rights they should have under law. The current insecurity makes it hard to see how they will play such a role today.

Most Iraqis would agree, according to Dr. Al-Ali that "we were afraid we'd be killed under Saddam ... but at least we could leave the back door open!" Only when security returns will Iraqi women be able to debate and define what rights they believe they should have under law.
Posted by janinsanfran at 1:25 PM

According To Elizabeth Warnock Fernea, in her book, In Search of Islamic Feminism, she met with Dr. Hiafa Abdule Rahman, Deputy Secretary of the Iraqi Federation of Women, in 1998. She noted this aspect of state propaganda stating, “Feminism has different meanings in East and West. Here in Iraq, we think of 'feminism' Western ideas of feminism, as dividing women from men, separating women from the family. We think that is bad, bad for everyone--man, woman and child. We want to support women to be equal with men, but within the family itself."

The War in Iraq and the plight of 20 years of war as it affects women is a key element to the Iraqi future and their ability to modernize. The risk of religious oppression in the current security situation seems to be a terrible tragedy if it comes about.