Iraq Stories:
Realism and its limits

After 10 days in Jordan and Syria meeting with residents of those countries, especially Iraqis, it is depressing, if not surprising, to return to a silly debate in the U. S. Congress about the "future" of the U.S. enterprise in the region.

"Democrats insisted that the war had cost too much and that the United States must begin pulling troops out, while Republicans equated any withdrawal with retreat." NY Times, June 22, 2006.

NO ONE in the region thinks the "future" they are debating has any reality. Not "western observers" who needed to speak off the record; not the advocates of the possible such as the policy wonks of the International Crisis Group (ICG); not Syrians and Jordanians who live amid the backwash of the U.S. military adventure; and certainly not Iraqis, who have long ago concluded that the superpower is either mad or entirely bent on handing their country over to its enemies in Israel or Iran, if not on brutally exterminating them through encouraging criminal gangs while withholding essentials like electric power. 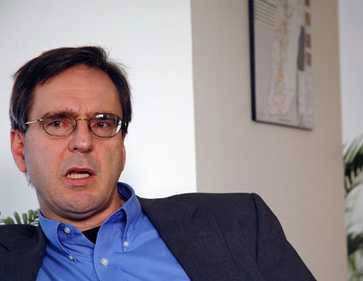 Joost Hiltermann is the Jordan-based Middle East project director for the ICG, an organization whose board of directors lists half the "wise old men" of Western international relations: figures like Zbigniew Brzezinski and retired General Wesley Clark lend their prestige to the group's work. Hiltermann very generously spoke candidly with our Global Exchange tour group of U.S. peace activists. He is in the business of providing research to governments, not on what has gone wrong in the past, but on what policy options may exist for moving forward with the least violence and human suffering.

ICG was unable to reach internal agreement on whether the U.S. invasion of Iraq in 2003 was justifiable. However Hiltermann believes his personal prediction has proved true: the U.S. won the military conflict easily, but has lost the peace. He describes the current situation in Iraq as very fragile indeed, as likely to collapse into inter-communal violence and criminal anarchy as to lead to any kind of stable state.

The most fundamental problem with the U.S. "victory" was that its imported occupation administrators, led by Paul Bremer, acted as if Iraq could be ruled without considering the well being of its Sunni population. Though Sunnis are only 20 percent of Iraqis and are concentrated in regions without oil reserves, they also have provided many of the country's vital technocrats, its secularists, and the years of Baath rule gave them an expectation of government influence. Yet U.S. occupation policy attempted to rule through dividing Iraqis along sectarian religious community lines. When Sunnis were simply excluded from influence in constitutional negotiations between some of the Shiites represented by the Supreme Council of Islamic Revolution In Iraq (SCIRI) and Kurdish parties, an authentic, desperate Sunni insurgency mushroomed. The sectarian logic of occupation policy has created a low level civil war. "Full scale civil war could be much worse."

Hiltermann says the U.S. belatedly realized its error last fall, pushed by international pressure, especially from the Saudis. Until an elected Iraqi government was finally formed two weeks ago, U.S. Ambassador Zalmay Khalizhad was effectively running the country while trying to encourage constitutional revisions that would diffuse sectarian conflicts. ICG proposes three elements of a path out of the present instability: If these measures fail, Iraq will dissolve in a fury of inter-communal violence far worse than anything seen yet, violence that might well spread to neighboring countries such as Jordan and Syria.

Hiltermann cannot not urge immediate U.S. withdrawal. A "precipitous" U.S. departure seems to him likely to make a bad situation even worse, akin to the U.S. ignoring Afghanistan and allowing it to fester after the Soviet Union pulled out in the late 1980s.

This was a line we heard as well from "responsible western observers" who cannot be quoted. Domestic U.S. political parties may be off in LaLaLand refighting the Munich crisis of 1938, but the policy wonks are obsessed with the Afghan experience.The U. S. dropped the ball there when it seemed to serve our interests and ended up with the Taliban. The wonks fear we'll do this again. (As in fact, we apparently have... in Afghanistan.)

From our interviews however, this seems a Western point of view. Some Iraqis and other Arabs are afraid of what will happen when the U.S. withdraws, but they also see eventual U.S. departure as essential and inevitable. A Jordanian policy sophisticate who asked not to be named summarized what seems to be the regional concensus succinctly.

My solution may be brutal, but I believe the U.S. must leave completely. Iraq will have a difficult rebirth; it may take 10 or 15 years. But Iraq has enough heritage to recover, to stand on its own two feet. There is no other way.

Posted by janinsanfran at 8:22 AM

Welcome back, Jan. Thanks for this fascinating and important series of posts.

News from the Times (UK) of an imminent peace proposal is a ray of light. Okay, a potential ray of light; it's hard to be outright optimistic.

Some have questioned what Hiltermann told us about Kirkuk. The ICG has now issued a report that further elaborates on the topic.