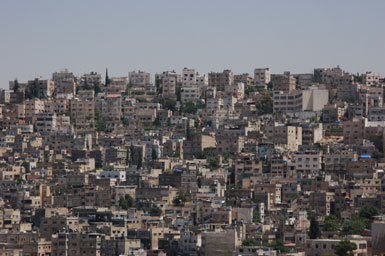 (The following notes are random impressions from three days in Amman, Jordan where I am part of a delegation of U.S. peace activists which is meeting with Iraqis and other international workers to try to better understand the effects and implications of the U.S. invasion of Iraq. Many posts about this journey will follow, but internet access is sporadic, so what follows is only a taste.

Disclaimer: I write from a country where I have never been before, where I do not speak the language; what I share may tell more about me than the place I am lucky enough to visit.) 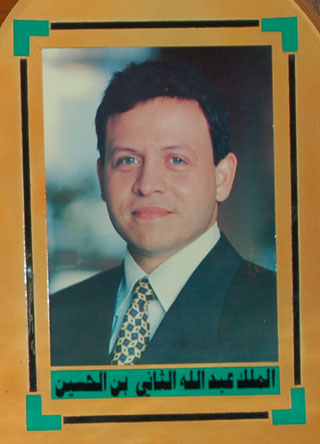 After getting used to the riot of posters of politician's faces that cover half the surfaces in Lebanon, it was a shock to come to a country dominated by only very few pictures: the smiling King Abdullah II, occasionally his father King Hussein, and one other visage which I take to be the Prime Minister. There are also occasional symbols of the Palestinian resistance, not surprising in a country where at least two thirds of the population is Palestinian.
***
The people who clean hotel rooms in a good, but not high-class, business hotel here are men.
***
This country is full of Iraqis displaced by the U.S. invasion. The Jordanians we've talked with (taxi drivers, tourism workers primarily) say they have flooded in, they are rich, and they have driven real estate prices sky high. The Iraqis we've met say that the Jordanians make it hard for them to stay, forcing them to go back to Iraq and re-enter every 3 months on a new visa; many Iraqis arriving at the border are not permitted to enter. Every Iraqi has a story of someone they know, a relative or a friend, who didn't make it out of their no-longer functioning, desperately insecure country.
***
Our guide, an Iraqi Shiite, tells of taking a bus back to Iraq to accomplish the visa renewal. She was fully sheathed in hijab so as not to attract attention. The rest of the passengers were Sunnis. At the border, the Jordanians made a point of letting the entire bus hear that the stamps on her passport showed she had visited the United States. (She spoke on college campuses early in the war.) The other passengers started making comments about how maybe they should spent the night in Fallujah. Our guide managed to leave the bus without going all the way into Iraq and come back through the Jordanian border -- in fear for her life.
***
The same guide helped two members of the delegation who are waiters in the U.S. talk with some restaurant workers here. These turned out to be Egyptians. They work 14 hours a day, 7 days a week -- and assured our guys that the conditions here were better than Egypt.
***
When we are not talking politics, we are visiting the ruins of the succession of civilizations that have flourished in this place: Ammonites, Babylonians, Persians, Hellenic Greeks, Romans, Selucids, Arabs, Turks and more. 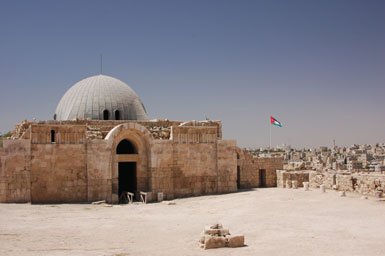 This Ummayyad Citadel tops Amman's highest point -- the ubiquitous Jordanian flag flys from what is said to be the world's highest freestanding flag pole in the distance.
Posted by janinsanfran at 1:23 PM

I haven't stopped by here in a while. What a great, fascinating journal & pix. Sounds (looks) like an incredible trip!