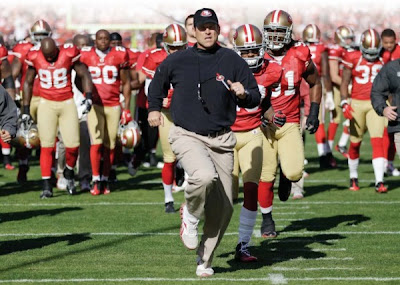 The fall football schedule has been released -- so I know when I'll be watching those 49ers this fall (at least those days I'm not busting my butt on the campaign.)

And as we go into the guts of the presidential season, we can also have a pretty clear idea what we'll be seeing along with football -- lots of Republican political ads. A recent article passed along some interesting insights about which ads will show up on which shows:

Television is inherently problematic for Republicans. “The average TV show will deliver 15-25% more Democrats compared to Republicans,” according to Feltus. Republican spending on positive commercials wastes money because, on average, many more Democrats will be watching. There are, however, specific shows that are more Republican than Democratic in their viewership – which is one of the reasons that detailed data on the partisanship of people who watch individual shows is particularly valuable to Republicans seeking to spend money wisely.

The top-ten Republican-tilted shows are “The Office,” “Rules of Engagement,” “The Mentalist,” “New Yankee Workshop,” “The Big Bang Theory,” “Castle,” “Desperate Housewives,” “Dancing With The Stars,” “The Biggest Loser,” and “Grey’s Anatomy.” The top ten most Democratic-leaning shows are “Washington Week,” “Tavis Smiley,” “Late Show with David Letterman,” “The View,” “PBS NewsHour,” “NOW” on PBS, “House of Payne,” “ABC World News Now,” “60 Minutes” and “Insider Weekend.” [Are we Dems really as grimly earnest as these preferences make us seem? Or have we massively given up on TV?]

…If the purpose of advertising is to reinforce commitments among voters likely to turn out – a strategy behind much last-minute media spending – Republicans have the edge. If, conversely, the goal is to mobilize sympathetic but not well-motivated constituencies – often the strategy behind early and mid-election spending – Democrats have the advantage because the data from nanotargeting provides a means to activate low-turnout pro-Democratic groups. …

…The television spending strategies of Obama and Mitt Romney will emerge as the campaign progresses. Given the highly polarized character of the electorate this year, both sides are likely to spend most heavily on their own base voters, seeking to get them to the polls, so that a viewer of “30 Rock,” for example, is unlikely to see any Republican ads, while a professional football enthusiast won’t see many Democratic ads. In effect, both sides will lay out megabucks preaching to the choir.

Oh heck -- you mean I'll be getting Republican ads with my football?

If the Romney campaign follows the pattern of his past electoral runs (according to The Real Romney about which more when I finish reading it) and the primary season, he can be expected to try to bury Obama in negative TV. He'll have the money; there are plenty of Republican sugar daddies as well as ordinary self-interested fat cats eager for the most cooperative president their money can buy. (For what it is worth, in February, Romney had raised 91 percent of his take in contributions od over $200 while Obama had brought in 47% from the small fry.)

It remains an open question whether all that Republican TV some of us will see, especially in contested states, will make much difference. Maybe football will bring the audience back, but this spring it looks as if broadcast and cable TV audiences were collapsing.

When you add into that mix the fact that most of America in what is called the heartland, certainly in the West, places like Tucson, AZ, they only get right wing talk radio and unless they pay extra no progressive news programs. They think they hear it all because they are told they do, it's going to be a very tough campaign for Obama to win and drive everybody, who watches any TV, nuts. They know negative ads work and Romney has proven he'll do anything to win-- well other than tell us what he'll do once he's in. I guess that is also part of winning.

What has frustrated me is we had felt we'd give less this year to his campaign. Thought we could afford less. The thing is we can't afford for him to lose as I have little doubt that whatever Romney does to social issues, where it comes to making fat cats fatter, he's their boy. They have proven it by all the money they have given, by their Super PACs. It's very disillusioning to me that negative ads work :(

But I love “The Big Bang Theory.”

Interesting the way the two top ten groups skew. I like some of both of them, but it's curious what makes a show appeal to a certain political stripe. I watch Grey's Anatomy and the PBS Newshour. But I don't watch a lot of TV these days, preferring to get my shows on my iPad or iMac instead.

I found you from an astute comment you made on Ronni Benne't's blog. You are an interesting person, Jan! I am enriched by your wisdom and your commitment to Democratic causes.