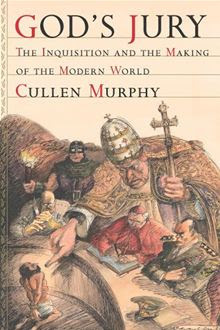 Cullen Murphy has written a very odd book. Not a bad one, just an odd one. God's Jury: The Inquisition and the Modern World is a meditation on the institutions of torture and oppression made possible by increasingly complex technological capacities in Western societies, loosely rooted in the history of the Roman Catholic Inquisition with side glances at other historic repressive apparatuses. If you don't already have a grounding in Europe-centered Christian history, this book won't give it to you; to get one, you probably should look elsewhere. But if you care about the past and future of authoritarian encroachments on individual conscience and social freedom, you might give this a look.

It's not hard to recoil from the regime of horror that was the heresy-seeking Inquisition. Late Medieval and early modern inquisitors had the full organized power of church and state behind them, interrogating, torturing, and sending to be burned presumptive apostates and Jews. They frightened whole populations into numb submission, as in the south of France. Murphy insists we recognize the close kinship between that terror regime and the activities of the U.S. empire in the first decade of this century.

Torture was an integral part of the inquisitorial process, though it was reserved for difficult cases and was technically subject to certain restrictions. [Nicholas] Eymerich [a Dominican theologian and author of a renowned torture manual, d. 1399] and others granted wide latitude to inquisitors, For instance, although the accused was supposed to be subjected to a single "cycle" of torture, if he failed to confess or retracted a confession the inquisitors could decide that the cycle had not proceeded sufficiently: the accused, to use the term of art, had not yet been "decently" tortured. The cycle could therefore resume. Half a millennium later, the interrogators of Khalid Sheikh Mohammed, the mastermind of 9/11, employed similar reasoning to expand their options. …

The inquisitors became astute psychologists. … Eymerich was well aware that those being interrogated would employ a range of stratagems to deflect questions and disarm the interrogator. In his manual, he lays out ten ways in which heretics seek to "hide their errors." They include "equivocation;" "redirecting the question;" "feigned astonishment;" "twisting the meaning of words;" "changing the subject;" "feigning illness;" and "feigning stupidity." For its part, the [U.S.] army interrogation manual provides a "Source and Information Reliability Matrix" to assess the same kinds of behavior. It warns interrogators to be wary of subjects who show signs of "reporting information that is self-serving;" who give "repeated answers with exact wording and details;" and who demonstrate a "failure to answer the question asked."

No reader is allowed to miss that Mullen is lumping Dick Cheney, David Addington and Donald Rumsfeld in with Tomas de Torquemada.

The unhappy similarity Mullen points out is not primarily between bad people in power, but founded in structures that states build to enforce conformity.

"Systems find ways of protecting themselves," [Irish professor of the history of Christianity at Cambridge] Eamon Duffy had said, "and ways to justify those measures to themselves." The measures, though sometimes rolled back, seem mainly to accrue. In [Reformation] England, the efforts of [Catholic Queen] Mary built on actions by previous monarchs, just as the efforts of [Protestant Queen] Elizabeth built on the actions of Mary. Motivations may change, targets may shift, but the infrastructure builds by increments. Proof of identity, record-keeping, informers, surveillance, denunciation, interrogation: these are the basic instruments. And as medieval kingdoms remade themselves into modern states, the instruments became better and were applied in a more systematic way.

Along the same lines, the Bush administration invented its torture regime on the fly when given an opening by the 9/11 attacks, offering up renditions, Guantanamo, enemy combatants, military commissions, etc. When elements of society committed to previous legal limitations on state power pushed back, under both Bush and Obama administrations the Congress and courts have codified and approved the innovations, while the executive has further articulated and streamlined systems of unchecked repression. The extraordinary has been regularized. And therein comes the horror of what the early 21st century United States is offering the world:

What separates an inquisition from other forms of intolerance is its staying power. It receives institutional support -- creating its own or relying on what exists. It goes on and on. Today, the basic elements that can sustain an inquisition -- bureaucracy, communications, the tools of surveillance and censorship -- are more prevalent and entrenched, by many orders of magnitude, than they were in the days of Gregory IX or Tomas de Torquemada. None of them will be reduced in significance in the years ahead. They will only become more powerful.

So should we all just go bury our heads and hope the new Inquisition keeps its focus on somebody else -- Muslims, immigrants, the poor …? Mullen's prescription for a turnaround is essentially ethical; we need to recall a virtue not much prized these days (or by any empire):

Humility is the Counter-Inquisition's most effective ally. It can't be legislated, but it can come to be embraced.

Well yes, but it's hard to imagine this country embracing humility unless we (including our elites) are taken down a peg or two. Losing remote mercenary wars in Iraq and Afghanistan doesn't phase us. Climate change havoc might get our attention -- though the purveyors of fossil fuels continue to do their best to keep us focused on illusory bogeys and circuses.

Yet Mullen chronicles in his glancing way one era that did end an Inquisition; maybe we do well to look at how European societies and the cultures that grew out of them cast off the Roman Catholic Inquisition beginning in the 1600s. Maybe there are some lessons there. He quotes an historian of the early modern period whose assessment seems pertinent.

"The Inquisition was extinguished." [Historian Francisco] Bethencourt said, "because it couldn't cope with the profound change of values in Europe throughout the eighteenth century. It started in Protestant countries, mainly in the Netherlands, then in England. It was in these two countries that the issue of tolerance was raised -- not for the first time, but as a new value, a new positive value. … This idea spread. And the Inquisition collapsed." It was a development for which there was no cure -- the intellectual equivalent of habitat destruction. …

For the old Inquisition, "tolerance" was "the intellectual equivalent of habitat destruction." Certainty of moral virtue that allowed, even required, institutional torture and intellectual repression to enforce conformity no longer could command space in which to flourish.

What would it take to deprive the New American Inquisition of the moral certainty that undergirds its bureaucratic operation? One answer is obvious: on-going globalization continually scrambles both cultural differences and cultural commonalities, making the assertion of any One Way more laughable than convincing. The closest thing the globalized world has to a universal God these days is unfettered market capitalism -- the Good Greed -- but the natural world and human resistance contest that orthodoxy everywhere. The habitat that supports the New American Inquisition may prove to be quite short-lived.
Posted by janinsanfran at 6:00 AM

If you accept the arguments of Glenn Greenwald and the ACLU, among others, the Obama Adminstration has continued in most part the policies of the Bush-Cheney regime.

Hi Anon: since I said so in the post, it might be obvious that I do largely accept the position of Greenwald and the ACLU that Obama administration has both accepted AND codified (much worse) the human rights atrocities promulgated by the Bush guys.

And what's worse, I'll have to vote for Obama in the fall because there is no better alternative.