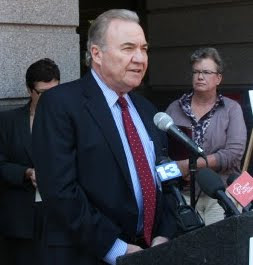 A couple of months ago I wrote about the bravery of El Dorado County Supervisor Ron Briggs who has turned against the California death penalty law he worked so hard to pass in 1978. Now the author of that law, Donald H. Heller, has explained his own change of mind in Sh'ma: a journal of Jewish Ideas.

A considered, evidence-based analysis has led me to conclude that capital punishment should be abolished. But that has not always been how I felt.

In the fall of 1977, I wrote the death penalty initiative (the Briggs Initiative) that became the law of the State of California after voter approval (82 percent in favor) a year later. The initiative dramatically increased the number of defendants eligible for the punishment of death. I wrote the initiative after spending almost 8½ years as a prosecutor, first in the Manhattan District Attorney’s office and then in the United States Attorney’s office for the Eastern District of California in Sacramento. By the time I left the United States Attorney’s office, I was a skilled and experienced legal writer and I was certain when I wrote the initiative that capital punishment was the appropriate punishment for willful and intentional murders and for murders committed in the course and furtherance of other serious felonies.

Within four years of the initiative’s enactment in 1978, California’s death row began to fill with inmates; today, the population is approximately 750. The zeal of prosecutors in populating death row was exceeded only by the lack of skill of defense counsel as reflected in the disproportionate number of death row cases that were reversed for ineffective assistance of counsel. For those of us who participate in a criminal justice system predicated on the right of defendants to have the effective assistance of counsel, especially when they face death as punishment, this was a grave problem.

I became concerned when legitimate questions of disparate treatment of defendants of color and defendants who were indigent were raised. At the time I wrote the initiative, I believed in the idea of “an eye for an eye,” and I never considered unacceptable the issue of communally sanctioned executions.

At the time I wrote the initiative, the cost of financing capital punishment was never considered. Now, it has become clear that death penalty cases are generating huge capital expenditures for California. The government must pay for both the defense and prosecution, since the vast majority of homicide cases involve indigent defendants. The government never disclosed the real cost in dollars, but a recent study under the direction of Judge Arthur L. Alarcon, senior circuit judge for the U.S. Court of Appeals for the Ninth Circuit, shows that more than $4 billion has been spent on the mechanism of death, and that taxpayers will continue to pay upward of $180 million per year for the prosecution and countless appeals of capital cases. …

There's much more. Heller now fears that the system he created may still condemn an innocent person, despite all the expensive safeguards. He speaks out for the SAFE California initiative to replace the death penalty with life without the possibility of parole. You can read the rest at the link.
***
Heller's willingness to admit a mistake and work to rectify it is morally admirable. In a political environment full of Etch-a-Sketch candidates and poll-tested posturing, ethical seriousness about the consequences of our policy choices seems almost naive. It shouldn't.
Posted by janinsanfran at 6:00 AM