Warming Wednesdays: you can't fool all the people all the time 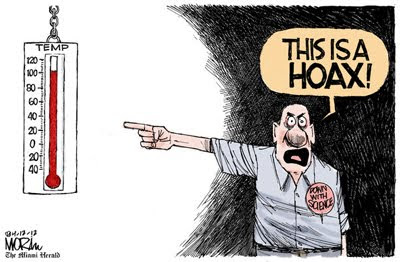 ... when people were asked whether they attributed specific events to global warming, recent heat waves drew the largest majorities. Scientists say their statistical evidence for an increase of weather extremes is indeed strongest when it comes to heat waves.

Asked whether they agreed or disagreed that global warming had contributed to the unusually warm winter just past, 25 percent of the respondents said they strongly agreed that it had, and 47 percent said they somewhat agreed. Only 17 percent somewhat disagreed, and 11 percent strongly disagreed.

After a while, people start believing the evidence of their senses.

Despite every other legitimate concern, we cannot ignore that our economic and social system is rapidly making the planet less habitable. So I will be posting "Warming Wednesdays" -- unpleasant reminders of an inconvenient truth.
Posted by janinsanfran at 7:42 AM