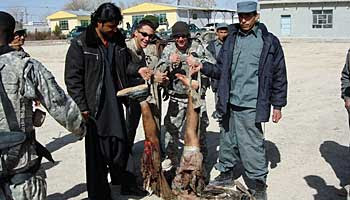 The Los Angeles Times has been given photos of U.S. troops posing with the body parts of dismembered Afghans.

The soldier who provided The Times with a series of 18 photos of soldiers posing with corpses did so on condition of anonymity. He served in Afghanistan with the 82nd Airborne's 4th Brigade Combat Team from Ft. Bragg, N.C. He said the photos point to a breakdown in leadership and discipline that he believed compromised the safety of the troops.

He expressed the hope that publication would help ensure that alleged security shortcomings at two U.S. bases in Afghanistan in 2010 were not repeated. The brigade, under new command but with some of the same paratroopers who served in 2010, began another tour in Afghanistan in February.

This is what happens when we send troops, over and over, to kill and be killed in a war whose goals and objectives have never been clarified by our political leaders. Firepower, anger and frustration are a bad mix.

Yesterday, when announcing that Australia would be drawing down its contingent in Afghanistan ahead of the U.S. schedule, Prime Minister Julia Gilliard used a telling phrase:

“the peoples of the world’s democracies are weary of this war.”