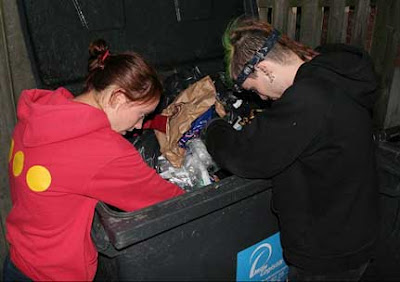 It takes tremendous, disciplined effort to survive destitution; people work hard at it. In a significant article in the Times, Jason DeParle described how people thrown off public assistance by the 1996 "welfare reforms" -- initiated by Republicans and colluded in by Democrats -- keep themselves alive, mostly outside the consciousness of most of us.

Asked how they survived without cash aid, virtually all of the women interviewed here said they had sold food stamps, getting 50 cents for every dollar of groceries they let others buy with their benefit cards. Many turned to food banks and churches. Nationally, roughly a quarter have subsidized housing, with rents as low as $50 a month.

Several women said the loss of aid had left them more dependent on troubled boyfriends. One woman said she sold her child’s Social Security number so a relative could collect a tax credit worth $3,000.

“I tried to sell blood, but they told me I was anemic,” she said.

Several women acknowledged that they had resorted to shoplifting, including one who took orders for brand-name clothes and sold them for half-price. Asked how she got cash, one woman said flatly, “We rob wetbacks” — illegal immigrants, who tend to carry cash and avoid the police. At least nine times, she said, she has flirted with men and led them toward her home, where accomplices robbed them.

“I felt bad afterwards,” she said. But she added, “There were times when we didn’t have nothing to eat.”

One family ruled out crime and rummaged through trash cans instead. The mother, an illegal immigrant from Mexico, could not get aid for herself but received $164 a month for her four American-born children until their time limit expired. Distraught at losing her only steady source of cash, she asked the children if they would be ashamed to help her collect discarded cans. …

I see the can scavengers every Thursday night when I put out our recycling bin. They are just part of the urban economy.

This is what we get when the "survival of the fittest" crowd (of both political parties) make public policy. The very poor don't vote; you can do anything to them to keep life chugging along merrily for the one percent. "Welfare reform" -- pushing the poorest off government assistance and out of sight -- is deemed a great success. The poor are working too hard to pose any threat to their masters.

It is not that no one knew this would happen when cash welfare was destroyed in 1996. DeParle goes back and interviews Peter Edelman who quit the Clinton Administration in horror over its acquiescence in this Republican initiative. Like having been right about the immoral folly of the Iraq war or the housing bubble at the Wall Street casino, this prescience gets those who showed it little applause in retrospect.

Our "leaders" might do what they did to the very poor to any of us if we let them. We mustn't any of us ever forget that.
Posted by janinsanfran at 6:49 AM

Ohio is cutting food benefits to low-income elders as well as housing assistance. It's the beginning of a holocaust.

Yup!!! I'm one of them. And I know plenty who are worse off than I am.

Thank you for keeping the hidden, behind the doors damage that systemic poverty inflicts on women and children under a bright light. This behavior can only be considered as intentiaonal genocide. Ronni Gilboa