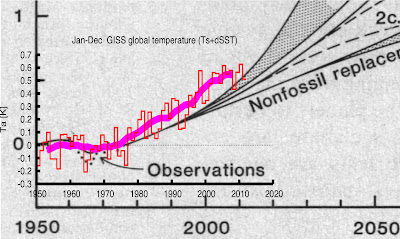 … a projection from 1981 for rising temperatures in a major science journal, at a time that the temperature rise was not yet obvious in the observations, has been found to agree well with the observations since then...Real Climate

It's not as if he's pushing some novel notions. RickyRood at his Weather UnderGround Climate Change blog casts a jaundiced eye on the prospects for a serious discussion of our growing peril in the 2012 campaigns.

Looking at the political landscape, climate change has fallen from the political discussion; it is a subject that cannot be talked about. … we have to talk about management of the climate if we are to address the problems of human-caused global warming. … As a strategy, addressing issues of clean energy, energy independence and energy security are more politically pragmatic than addressing issues of climate change. They offer a path towards addressing climate change; they are part of the best-we-can-do-at-this-time strategy. However, our inability to actually talk about solving the climate change problem means that we will not address the problem; we will elevate our risks; we will continue to impact negatively our economic and technological competitiveness. …

[We are seeing] the stunning inefficiency and ineffectiveness of our politically based determination of priorities in the development of knowledge-based environmental policy. We look knowledge in the face and deny its existence. We make our convenient arguments for the need for more research in the ill-posed pursuit of the illusive final facts. We fall into the diversion-motivated process of always asking for the next piece of information in what can be a never ending series of information discovery.

I found the October/November 1969 Technology Review in a box of Space-Age memorabilia I packed up from childhood. This issue was entitled “Man Among the Planets,” and the first article was “The Modification of the Planet Earth by Man,” by Gordon J. F. MacDonald. MacDonald in 1969 argued that we had already altered the planet, and that changes produced by humans were already at the scale “caused by nature.” He warned that we needed to do research into large-scale, man-made, and inadvertent changes to our environment. He called for the development of climate prediction.

Since 1969 we have taken the observations, we have developed the theory, and we have determined unequivocally that the Earth has warmed and that we the fuel-using people are the primary reason of the warming. As MacDonald called for in 1969, we have placed a lot of emphasis on climate and environmental research, and the results of that research have provided actionable information – knowledge. We look at that knowledge in eye and, as a society, we deny it. We look away. Perhaps, if we look away then it is not really there.

But though the national scene remains dismal, it's worth noting that California lawmakers have taken a different path.

California, long America’s environmental trendsetter, is about to push the envelope once again. On May 1, the state will hear from some of the nation’s largest insurance companies about the financial risks climate change poses, not only to the companies but also to their customers and investors. Some 300 firms, representing the vast majority of the U.S. insurance industry, are expected to reply to a survey that includes such questions as “how do you account for climate change in your risk management?” and “has the company altered its investment strategy in response to [climate change]?”

… [Dave] Jones [the California insurance commissioner] emphasized that the survey is “not prescriptive.” But analysts predicted the exercise “will inevitably cause the [insurance] industry to do things differently,” in the words of Andrew Logan of Ceres, a group of investors and NGOs that helped develop the survey. “What [insurance companies] choose to cover and not to cover, and what they invest in, has great influence over individual and corporate behavior.”

That is, there is more than one way to skin a cat. Can't persuade capitalists and other citizens to attend to a consensus of scientific opinion? Make them calculate their own material risks and watch them jump.

The issue then becomes, who pays for society wide efforts to mitigate the harm of climate change? That's the discussion the political class is shirking and seems unable to approach. It behooves all of us to demand it now, as it will only be harder later.

Despite every other legitimate concern, we cannot ignore that our economic and social system is rapidly making the planet less habitable. So I will be posting "Warming Wednesdays" -- unpleasant reminders of an inconvenient truth.
Posted by janinsanfran at 6:00 AM