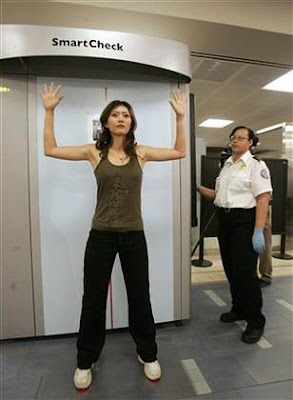 Okay, most all of us hate those stupid TSA "security" lines and intrusive searches that have become part of flying since 9/11. Most of us know this rigamarole is not really about keeping us safe. It is some kind of crazy mixture of jobs program for the 58,401 (Wikipedia) TSA employees, reminder from the government that we should huddle in fear and surrender all rights and dignity, and precaution against brain dead malcontents too dumb to evade our ham-handed "protectors."

But have you ever thought about what it would be like to try to fly if the gender on your birth certificate didn't match the gender your appearance presents to the world? I do think about this, though not a lot. I'm an old lady who has frequently been (mis)taken for male most of my life and I'm used to embarrassed apologies from people who've assigned me the wrong gender. I know the look when they realize they goofed when they called me "Sir." Most folks who make this mistake are more uncomfortable about it than I am.

But think what it might be like if you were transgendered, perhaps in the midst of transitioning, trying to find your way into the gender that you feel is you and you had to deal with "screening." Alissa Bohling has published a terrific article about this situation. Some bits:

Because gender has become one of the first markers in the technology-centric race for body-based data - known as "biometrics" in surveillance-speak - transgender and gender non-conforming people have been some of the first and most directly affected. …

Transgender people's experiences vary as widely as the human mind and body, but trans communities have mapped out some common ground in language, experience and even documents such as the Transgender Law Center's (TLC) fact sheet Trans 101. The title might be considered a nod to the ad hoc teaching gig some trans people are thrust into simply by virtue of their identities - Is that your real name? Did you have a sex change? Why should I let you onto this flight? - and for a two-page crash course, it goes a long way in dispelling gendered assumptions that underlie security measures like body scanners and Secure Flight. …

Millimeter wave machines are designed to locate any "anomalies" on a traveler's person and superimpose them onto a generic image of a human form, leaving the traveler's body on the safe side of the digital curtain. But before someone sets foot inside a millimeter wave machine, security staff must press one of two color-coded start buttons: pink for women, blue for men. ...

Yeah, even the machines get into the act of trying to pigeonhole people by gender -- and therefore highlight that gender is not as binary as many would like to assume. Go read the whole thing. It's mind-opening.

Photo by Elaine Thompson / AP
Posted by janinsanfran at 7:00 AM