It's not just that George Zimmerman could (apparently) legally shoot Trayvon Martin that raises incredulous eyebrows. Security arrangements for this summer's GOP shindig have run into a snag.

TAMPA -- Hoping to head off violent protesters during the Republican National Convention, Mayor Bob Buckhorn has proposed a litany of items that will be considered security threats during the week-long event.

The list runs from air pistols to water pistols and also includes items such as masks, plastic or metal pipe and string more than six inches long.

Conspicuously absent from the list of potential weapons: Firearms.

That's because state law bans local governments from placing any restrictions on the carrying of guns in public spaces.

Oops. Mustn't risk the wrath of the National Rifle Association. Be sure to pack heat.

Nicholas Beaudrot has a suggestion for those of us who think perhaps there should be limits on guns.

… the quickest way to enact restrictions on walking around while carrying a gun is probably for the "wrong" kinds of people to start carrying firearms, causing a freakout among the people who wrote the laws in the first place. 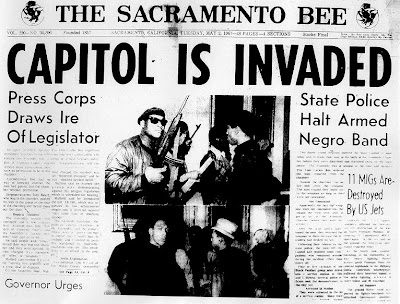 That 1967 episode may have something to do with the fact that California still has some of the most stringent gun regulation in the country. Law enforcement solved the problem in its own way: infiltrate, imprison and sometimes just execute the Black Panthers.

Meanwhile, in Oakland, the nursing school shooter who murdered six people the other day had "a string of debts but no criminal record that would keep him from buying a gun." From a memorial service for the victims:

One of the speakers, Mayor Jean Quan, said the gun violence that shook Oakland this week could occur anywhere in America.

"This is America, where you can find a gun easier than mental health services," she said.

Meanwhile the NRA is working to undermine what gun laws we still have. forcing all states to allow concealed weapons permits issued anywhere.

… despite the concerns of the mayors, law enforcement and constituents, the gun lobby and their allies have already jammed this dangerous legislation through the House. And now they’re trying to push it through the Senate. If this measure becomes law, dangerous people, including sex offenders and domestic abusers, could get a permit in a state with lax standards and your state would have to accept it no matter what.

Protest here.
Posted by janinsanfran at 7:00 AM

Why does none of this surprise me?