Why bother to support the current imperfect Democrat? 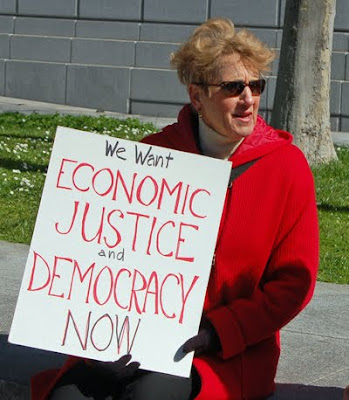 Now there's a hardy perennial question for a presidential season. For people of the democratic left, Democratic champions can be trusted, above all, to disappoint.

Political scientist and pundit Jonathan Bernstein takes a stab at it:

Supporting a candidate who you know will let you down is a lot harder than supporting one who you can pretend will be perfect if the impossible happened and she was elected, or just sitting out the election entirely because neither candidate measures up. It may take some courage to support someone despite important, serious, substantive reservations. It is, however, what needs to be done in a democracy.

That certainly doesn’t mean anyone should support imperfect candidates uncritically – and in a complex democracy such as the United States, there’s nothing at all wrong with choosing to focus one’s energies where it will make the most difference, which is not always the presidential contest. But to pretend that the president makes no difference is just as bad a mistake as to believe he is all-powerful, and to pretend that substantive differences that will affect millions of lives are meaningless is even worse.

I agree while feeling far more distress than a "serious" guy like Bernstein would ever admit to. Barack Obama is a very unsatisfactory president if, as I do, you think the United States should get over our addiction to acting as the world's policeman and, a corollary, building a global panopticon where everyone is subject to the arbitrary surveillance of the security state. I have important, serious, substantive reservations about the guy and the direction in which he is leading the country.

But I do still believe in democracy itself -- not as a perfect system nor certainly as delivering perfect results -- but as preferable to any alternative yet envisioned by any human society. So, as long as we have it, playing the democracy game seems the right way to go.

This year I'm focusing my energies elsewhere, trying to increase the sum total of civilization in our polity, if only by a smidgen. What I won't do is give up on the struggle.

H/t to Dohiyi Mir for the Bernstein article.
Posted by janinsanfran at 5:30 AM

I'm supporting Obama because I can't risk a Republican getting in office.

I second you, Kay!

I wrote a lot on this but the Beatty Nevada internet wouldn't let me stay on long enough to post it. I saved it though to my Word, might write a blog on it myself --

I think those who don't support Obama and other Democrats who haven't done all they want, will find out why they should have when Romney gets in office and maybe with a Republican Senate as well as House. They will learn as they did with Bush how bad it can be; they will figure it out but not until more hard won rights are gone. They won't know until he jumps into a war with Iran which he won't pay for, when abortion is outlawed again and contraceptives harder to get in many states, when social programs disappear faster, and when some try again to criminalize any relationship that doesn't fit within the bounds of Christian definitions for marriage. They will again find there is a difference when we have six supreme court judges like Alito and Roberts. They will find out when more unions are dismantled step by step, more pensions not so secure as they thought with a group in power who only believe in war as a purpose of government, but it'll be too late.

Obama and other imperfect Democrats can easily lose if the right cares a lot and the left goes off on a mad-- with it too late before they realize. I've heard all this before and we got Bush as a result. Democrats lose when they don't work for it.

The other thing for the far left to remember is this nation isn't. The far left cannot elect a candidate in very many states. The far right does better at it and we saw how that works out with the House takeover in '10. It will take education and work to help people see why leftie values are good and better even for their own lives as money isn't everything

Don't get me wrong -- I'll be voting for Obama. I very much wish for his re-election. The alternative is appalling. But I am not going to shut up about where Democrats go wrong ... we need to make them better, not dump them!

That takes work at all levels of politics. I actually do believe in democracy (unlike say Fox News or the plutocrats) but that also means I believe we get government only as good as we make it!