Worth calling attention to ...

Micah Cohen offers a "living autopsy" of libertarian Rep. Ron Paul's campaign for the Republican presidential spot, finding that Paul has "far exceeded the accomplishments of his 2008 campaign."

One reason: his opposition to the Afghanistan war. Paul is the only politician getting air time who opposes this imperial adventure. And in this if nothing else, he's go the people on his side. 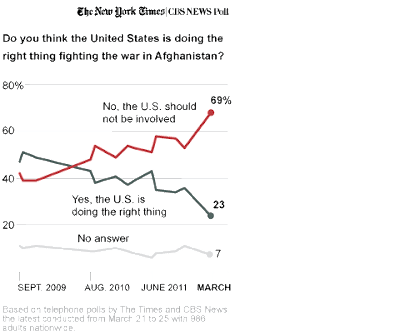 Too bad the preferences of the majority of us are only spoken by a guy who is a rather nasty racist kook.
Posted by janinsanfran at 10:21 AM