A mother trapped in the immigration meat grinder 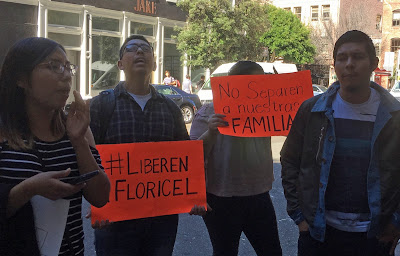 Tuesday morning family and friends of Floricel Liborio Ramos made their voices heard outside the federal immigration court in downtown San Francisco.

Inside, Floricel, who has been held since March at the Mesa Verde immigrant detention center near Bakersfield, was supposed to get a long delayed, though constitutionally required, hearing on whether she could be released on bond. She didn't get her chance. Immigration judge Valerie Burch couldn't get through the many other cases on her docket, so Floricel and her family will have to wait until at least November 8 to find out whether they can be reunited.

Floricel's story is like that of too many other immigrants caught up our xenophobic panic over newcomers we see as Other (information from family, assembled by Faith in Action Bay Area.)

One Sunday in March of this year, Floricel treated her three children--Jennifer, 17, Michael, 12, and Daisy, 11--to a Sunday breakfast at IHOP in Lodi. As the family was just about to pull out of the parking lot to attend church, ICE officers surrounded the vehicle and took Floricel away, leaving Jennifer distraught and her two younger siblings crying in the back seat.

Prior to her detention, Floricel was both the emotional pillar and sole breadwinner of the family, ever since her husband and the father of her children was deported in 2012. She held multiple jobs to support her children, working in the fields and cleaning hotels. At one point, overworked and exhausted from worry, Floricel started to use alcohol, and in 2016 was arrested and convicted for driving under the influence. After her arrest, Floricel was sentenced to a rehabilitation program, and when she completed it, her teachers called her a model student and example for her peers. ...

Floricel's story is not unique. ICE will indiscriminately arrest and detain the heads of "mixed status" households, in which parents are undocumented and the children are U.S. citizens. ...Immigrant parents like Floricel are often punished twice for even [small] offenses -- once when they complete their sentence, and again when they are detained while in deportation proceedings. ...

Floricel has advantages that many detained immigrants lack: devoted children who are U.S. citizens, a supportive community, and assistance from Pangea Legal Services. Not surprisingly, she doesn't have a lot of money to give the government if the immigration court should allow bail. Her family have set up a fundraiser page.

You can follow Floricel's struggle to remain with her family on Facebook.
Posted by janinsanfran at 5:00 AM

I sympathize with her and many like her but this business of driving when drunk, it's a choice she made. Get drunk. Don't drive. Too many have killed others with the loose attitude toward-- it's only a few drinks and i need to drive. Just lucky she got caught and not had the accident first.

I don't see these people as "other." I can't put them out there for perusal and judgment.

I guess I don't think we should be throwing away people who cleaned up their acts and suffered the penalties. The notion that this woman, for 19 years a contributing member of society who has raised citizen kids, should be summarily deported seems crazy cruel to me. A lot of people make mistakes. The U.S. needs to pass a sensible immigration law that recognizes that our failure for decades to deal with real people who do what they can to get by and the employers who like getting them cheap has created this legal morass. Mass deportations make harmless people scapegoats for our political failures.

I agree that our immigration laws are selfish intended to profit some at the expense of others. But this business of taking driving when drunk lightly is a bridge too far for me. Drunk drivers not only kill themselves but others. Our culture is finally cracking down on driving drunk, with very stiff penalties for those legally here too, but we should have a long time ago. We don't know how many times she drove drunk and didn't get caught. If she got caught this time because of driving behavior that means it was not safe in the mind of the officer who stopped her. Now if she just got randomly pulled over and she had low numbers, I might agree that it was unfair. I live where it's a big deal to have drunks on our narrow country roads. She was doing something that could have led to deaths. I drink... recently, it's been once in a while too much (yes, my doctor gave me a 'look' last time I had a check-up when he asked and I told him the truth). Whiskey is my drug of choice... but I don't drive when I do it and if I know I have to drive, I don't take that first shot. As a mother and woman here illegally already, she made a big mistake. Maybe compassion, depending on the state where she lives, will give her a second chance. I hope if she gets it, she takes drinking more seriously for her sake and that of others.