From Siberia with love

Back in the USofA; my home turf is on fire; and Trump and the GOPers continue to try to destroy everything decent, generous or responsible about this cantankerous democratic republic. So time for some (moderated) escapism. 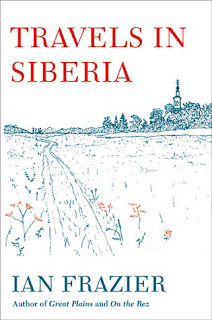 For the last six weeks in spare moments and on airplanes, I've been delighting in the more than 400 pages of Ian Frazier's Travels in Siberia. After all the dispiriting reading about Russia I've indulged in lately (see this and that) this gentle, humorous, thoughtful book was a pleasant reminder of other facets of that huge opaque country.

The inescapable theme of Frazier's five journeys through Siberia is the incomprehensible extent of Russia's massive stepchild region. Stretching over nine times zones, comprising nine percent of the earth's land area, and home to only 40 million people, this is truly the "back of beyond." Terrible sub-zero cold dominates the usual image of the place, but Frazier's summer drive across the region was hot, dusty and mosquito-plagued, quite a different set of hardships. Tzars and commissars dispatched their enemies to Siberia to die; contemporary oligarchs treat the land and its people as a great open pit mine for oil, gas and minerals. And yet some of the least disturbed land on the planet remains in the harsh environs north of the Arctic circle. Frazier is a beautiful narrator of both horrors and delights, such as this description of a night camping by Lake Baikal:

When a wave rolls in on Baikal, and it curls to break, you can see stones on the bottom refracted in the vertical face of the wave. This glimpse, offered for just a moment in the wave’s motion, is like seeing into the window of an apartment as you go by it on an elevated train. The moon happened to be full that night, and after it rose, the stones on the bottom of the lake lay spookily illuminated in the moonlight. The glitter of the moon on the surface of the lake—the “moon road,” Sergei called it—fluctuated constantly in its individual points of sparkling, with a much higher definition than any murky water could achieve. Light glitters differently on water this clear. I understood that I had never really seen the moon reflected on water …

Frazier's one-over-lightly survey of Russian history aims to capture what made the nation seem so unlike either Europe or its Asian neighbors. Until modern times, Russia was subject to a series of invasions from fierce tribes from the remote steppe, repeated waves of murder and pillage. He suggests:

[I] actually can’t help returning to [the question]: namely, how Russia can be so great and so horrible simultaneously. I think one answer is that when other countries were in their beginnings, developing institutions of government and markets and a middle class and so on, Russia was beset with Mongols. That is, Russia can be thought of as an abused country; one has to make allowances for her because she was badly mistreated in her childhood by the Mongols.


Among historical Russians, he holds up the aristocratic insurrectionists, the Decembrists, who tried to overthrow the tzar and bring Russia into Europe in 1825; those who survived the failure of their coup were exiled to Siberia. He ponders what their story can suggest to people in the US.

With the Decembrists as a point of comparison, I have increased my respect for America’s Founding Fathers and the men they led, who seem to have believed even in their unconscious that King George III of England really was no better than they were. They were fortunate, perhaps, that to them King George was kind of a theoretical idea, being so distant from them physically.

True equality is a difficult concept to hold in the mind. I believe we Americans have lost our grip on it today. I know that in my case, I can tell myself that I’m just as good as a billionaire and even believe that it is true. But when I’m in the actual presence of a powerful person, my own concept of equality gets blurry, and I have a regrettable tendency to truckle, if only to be polite.

I don't think that goes for all of us, but perhaps it is true for too many. The Cheato is probably curing many of any respect they may have had for wisdom signaled by possession of great wealth.

Frazier's opus is a worthy "long read". Siberia (and Russia in general) is too large for facile description or certainly facile conclusions. Highly recommended.
Posted by janinsanfran at 5:00 AM

Good rundown. Russia seems obscure to me, and I'm sorry I will never be able to travel there.