On ageism in the Trump era

I see (and hear on podcasts) more and more assertions like this one about our impetuous, ignorant president.

No one should expect him to grow in office. He’s 71. At that age, either you have compassion, self-knowledge and a conscience, or you don’t.

I appreciate Robinson's writings. And I certainly not an admirer of the Orange Cheato. But Robinson's formulation makes me uneasy. The trouble with Trump is not (just) that he is an old guy with out-of-date habits and biases who shows no capacity to learn anything new or novel. He's not an asshole because he is 71; he's an asshole because he is an unrepentant asshole. Robinson will turn 65 in a couple of years; maybe that will jar his consciousness. Conclusion: this formulation is ageist. 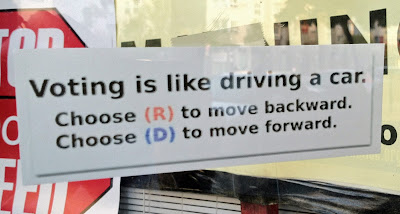 So how about this:

Democrats Should Not Consider a Presidential Nominee Who’s Older Than Trump
... On election day in 2020, Bernie Sanders will be 79 years old, and Joe Biden will be a couple of weeks from turning 78. These happen to be the early front-runners for the Democratic nomination, according to initial polls. ... Neither has announced a 2020 candidacy, but both have conspicuously refused to rule it out. ...

Biden 2020 or Sanders 2020 is a really bad idea, for reasons that go beyond the anomaly that either would make the oldest man ever elected president the youth candidate in his reelection bid. ...

... Setting some “cap” on the age of presidential candidates is inherently an arbitrary exercise. But in terms of 2020, the logical rule would be that Democrats should not consider as nominees anyone older than Trump himself, who will turn 74 during the general-election campaign. Democrats should let him be the one to parry questions and concerns about age and health. ...

Kilgore's case hinges on the fact that men in their mid-70s statistically have a rapidly rising probability of dying, 22 percent over the next six years in stats he presents.

I'm willing to give the hint of age stereotyping in this a pass. It's the business of political activists and political pundits to think strategically. That's what Kilgore is doing here. I like his strategic thinking.

Democrats need to acknowledge and put forward leaders whose very being screams "we are the party of a new and better future." If we're ever to get out of our current anti-democratic (small "d") morass, young people are going to have to be engaged and lead. It is not ageism to insist that Democrats have to find leaders among up and coming age cohorts. It's simply fact.
Posted by janinsanfran at 5:00 AM

Excellent analysis. Ageism is rampant toward both older and younger people, but it is not ageism to say we need young voters, or to let Trump field the questions on age.