The book tour impressed me more than the book 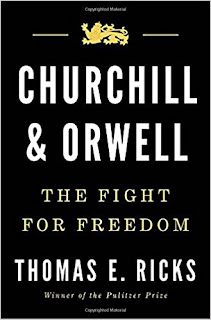 Last spring, journalist and national security blogger at Foreign Policy Thomas Ricks went on tour to promote his latest book, Churchill and Orwell: The Fight for Freedom. I've read Ricks' posts regularly for years. Suddenly I had a repeated chance to listen to him discuss current events with a series of radio and podcast hosts. Ricks is widely read and deeply knowledgeable about our past and current wars, the strengths and weakness of the U.S. military, and the decaying U.S. imperial position in the world. He knows the empire and armed forces without being a cheerleader for dumb wars or dumb nationalism. When he gave a book talk nearby, I attended. And I bought and read the book.

I so wish I had found the book as interesting as I found Ricks' cogent observations on the pickle our nation and world is in.

neither man ever lost sight of of the value of the individual in the world and all that means: the right to dissent from the majority, the right even to be persistently wrong, the right to distrust the power of the majority, and the need to assert that high officials are in error -- most especially when those in power strongly believe they are not. As Orwell once wrote 'if liberty means anything at all, it means the right to tell people what they do not want to hear' -- most especially, for him, facts they did not want to acknowledge. ...

Churchill helped give us the liberty we enjoy now. Orwell's writing about liberty affects how we think about it now. ...

If you are unacquainted with the history of Europe in the inter-world war years, this is a good introduction to figures whose intellectual courage grasped that civilization's predicaments with a clarity not shared by their fellows.

One reason [Orwell] did not appear in accounts by contemporaries is that he understood their era better than they did.

Meanwhile Churchill's exhortations and energy led Britain to stand alone against Hitler until the United States and Russia came in to win World War II, setting the stage for the world order we have known until recently.

Neither man seems particularly likable to me. Churchill took advantage of his social position to demand space for himself which no accomplishments prior to 1939 seemed to justify. He was often a blowhard and a bit of a drunk.

Debating Churchill was 'like arguing with a brass band,' a member of the British Cabinet once grumbled.

Orwell became something of a disappointed recluse toward the end of his life (he died in 1950, before achieving literary fame.) I find it easier to have empathetic feelings toward him than toward Churchill; he fought and almost died for his socialist hopes in the Spanish Civil War -- and was then nearly killed by Soviet Communism's betrayal of those dreams in that same war. The courage that carried him to the battlefield was turned to telling the truth as he saw it about totalitarianisms of both the right and left. Orwell chose a lonely, friendless ground to stand on; that's hard.

If this intrigues, read the book. Or google "thomas ricks radio" for a bonanza of recent discussions with this fascinating author. Ricks follows his subjects' example by refusing to sugarcoat the extremity of our own terrible time while also pointing to values worth fighting for.

UPDATE: For a smidgen of Ricks, see this biting blog entry from today.
Posted by janinsanfran at 6:00 AM

Digressing slightly from the main point of this post, I often find many of those whose words and issues positions, accepted by many to have significant value, have undesirable personal traits or behaviors — some more repellent than others.

Perhaps I should have added my reference was to Churchill and Orwell.