Yet another reason to despise this administration 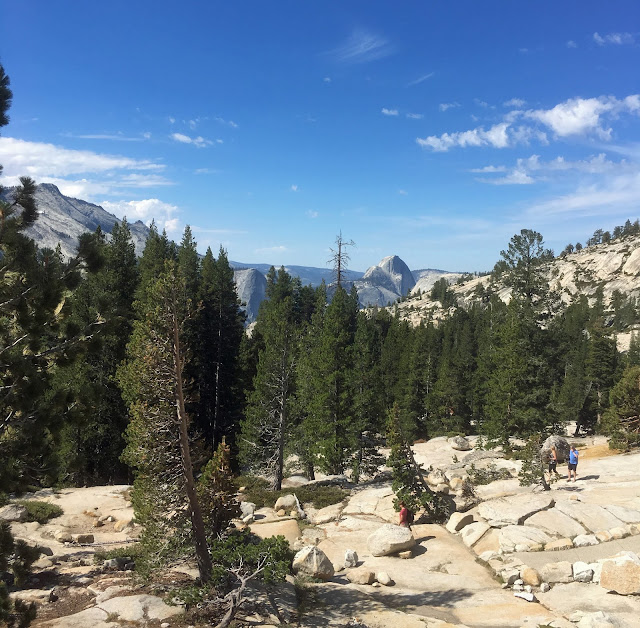 If you are hoping to enjoy this view (from Olmstead Point on California Rte. 120 looking toward Half Dome in Yosemite), Interior Secretary Ryan Zinke wants it to cost you more than twice as much next summer, $70 instead of $30 to drive a vehicle into the park.

The man who is working to open public lands to oil and mineral extraction thinks parks should pay more for their upkeep. Congress has been underfunding the National Park Service for years; the parks have a $12 billion maintenance backlog -- broken bathrooms, aging campgrounds, and roads pitted with potholes. The Trump budget proposal aims for a $300 million cut in their operating budget.

So the administration is proposing "surge pricing" -- jacking up the prices at the 17 most popular NPS destinations during their high seasons, mostly from May through October. You know, let's run our parks like Uber, squeezing the highest dollar out of "customers."

But park users are not "customers". We, collectively, are owners. There are many who protest the Zinke plan:

“For some Americans to be priced out of our national parks, I don’t think that’s the right message,” said David Lamfrom, a Barstow resident and staff member at the nonprofit National Parks Conservation Association. “We need to make sure that these places that are owned by all Americans are accessible to all Americans.”

The Mercury News (San Jose) denounces the new charges and promotes an alternative:

Leave it to the Trump administration to come up with the worst possible remedy for a system Wallace Stegner famously called America’s best idea....[This] could be America’s worst idea. It will make the parks unaffordable to low-income Americans who already struggle to save money to visit our coveted national treasures. It could even give some middle income Americans pause.

Even while gouging visitors, the plan would only raise around $70 million, far less than the deferred maintenance and backlog requires.

A bipartisan bill introduced in March by Sens. Mark Warner, D-Va., and Rob Portman, R-Ohio, offers a far better solution. The senators report that congressional financial support for national park maintenance has decreased by 40 percent over the past decade — a national embarrassment. They propose that $500 million a year be allocated to the National Park Service from “existing revenues the government receives for oil and natural gas royalties every year, until 2047.” ...

As President Franklin D. Roosevelt said, “There is nothing so American as our national parks. … The fundamental idea behind the parks … is that the country belongs to the people.”

Don’t raise entrance fees and make America’s national parks only accessible for the richest of us to enjoy.

Fossil fuels should stay in the ground if we want any hope of mitigating climate change. But at the very least, the current government take from mining and drilling could be used for the benefit of us all.

The National Park Service has opened up a website for citizen comments on the park price increases which will remain open until November 23.

***
And for citizens and residents over 62, the Interagency Senior Pass (Lifetime) at $80 is still a very good deal!
Posted by janinsanfran at 5:00 AM

Infuriates me that this is happening with OUR National Park System as I’ve followed actions in D.C. Should be a national outcry of protest. We had so much enjoyment visiting the parks and so glad we did it when younger since my husband’s health prevented our continuing such excursions in his older years as we had expected. Have read of other basically commercialization plans they’ve considered and sure hope they’re prevented from violating the parks.