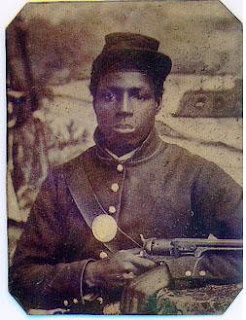 First the Cheato sent one of his generals to defend his lack of empathy for military widow Myeshia Johnson. That didn't work out so well; General Kelly demeaned himself by making a completely false charge against Johnson's Congresswoman -- like Johnson, a tough black woman.

So the Cheato sent his tame black dimwit, Housing Secretary Ben Carson, along to channel his opinion of Johnson:

Asked about Sgt. La David T. Johnson’s family, who criticized Trump’s remarks, Carson said, “I think there were people who were just looking for something to complain about.”

Jamelle Bouie outlines the painful history of African Americans with the U.S. military:

That Sgt. Johnson was black, and Myeshia Johnson is black, are not incidental details in this story. They are the context which gives this confrontation particular resonance in American history, and makes it so fraught with meaning. From its inception, this country has had an ambivalent relationship with the idea of black military service, to say nothing of individual black soldiers and their families.

The 1775 Continental Congress didn’t exclude black Americans when it created an army for the fledgling American independence movement, but it wasn’t eager to arm them either. ... Ultimately 5,000 black Americans served in the Continental Army, establishing a tradition of black military service that persists to the present. But while blacks have fought in each of the country’s wars and conflicts, it’s not been until recently that their participation was welcome.

... Even before integrated units, the mere fact of black soldiers challenged ideals of American manhood and citizenship that were built on whiteness. To take up arms in defense of the nation was both an obligation of citizenship and a privilege rightfully reserved for white men. ... [During the Civil War], military necessity would again force the issue. First came the Emancipation Proclamation, then an active effort to recruit and organize black soldiers. Nearly 180,000 freemen and freedmen would serve in the Union Army, bolstering the force as it fought a brutal war of attrition against the Confederacy. They would do so facing discrimination, inferior pay, and a leadership that didn’t quite trust their abilities: Black regiments were led by white officers. 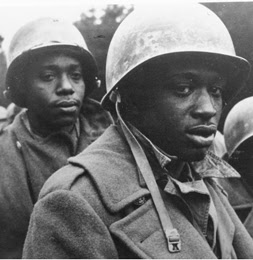 ... Not even the fight against Nazism was enough to compel the United States to accept black enlistees on equal terms with their white counterparts. Blacks again fought in segregated units and again faced racism from white officers and enlisted men. Nalty notes that “Many white officers did not credit blacks with intelligence, let alone hopes or ambitions or indeed feelings of any sort.” ... Full integration wouldn’t come until after the Second World War, with an executive order from President Harry Truman. And that was only inside the military: In the civilian world, Jim Crow would hold sway for another 20 years.

... There’s little chance that Donald Trump knows this history of hostility and disrespect, even as he evokes it with his conduct toward Myeshia Johnson. The dynamic seems to capture Trump’s broader relationship to history. He is untethered from any knowledge of America’s past, from any grappling with the pain and injustice that shapes and defines much of this country’s history.

But he sure knows how, instinctively, to pick away at racial scabs.
Posted by janinsanfran at 5:00 AM