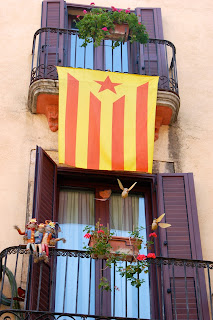 Despite having traveled for a month in Spain this fall, I don't have any very clear idea what I think about Catalan independence.

My friends in Spain, good lefties who live in Madrid and despise the corrupt right-wing government of premier Mariano Rajoy, nonetheless dismiss Catalan separatism as petulant and unrealistic. What do I know? I've learned to look at the English version of El Pais, a social-democratic paper that is the country's top selling daily. El Pais tilts hard against Catalan secession, treating the effort as anti-democratic and nativist.

Catalan aspirations are deep-seated, anchored in the region's distinct history and cultural identity. But the momentum for independence catalyzed only in the wake of the 2008 financial crisis, as Catalans saw their robust region being dragged down by a cratering Spanish economy. Catalan officials say the region still pays about $12 billion more in taxes each year to Madrid than it gets back.

These frustrations are not exclusive to Catalonia. A number of fledgling secessionist or autonomy movements in other parts of Europe, from Lombardy in Italy to Flanders in Belgium to Scotland or even London in Britain, are grounded in the belief that their regional interests are not being served by the national politicians who call the shots. Over the past year, we've tended to think of nationalism in the West in the context of angry, right-wing populist movements, fueled by disaffection with elites and hostility to immigrants.

But another trend to watch ought to be the impatient regionalism of more metropolitan parts of Europe, frustrated by the backward politics of their nation-states.

Tharoor points to a Guardian column by Paul Mason which makes a thought-provoking argument:

... the positive factor driving progressive nationalisms, from Scotland to Catalonia, is technological change. Information-rich societies reward the development of human capital; so the ability to study in your first language, to participate in a rich national culture, to create unique local selling points for incoming foreign investment is more important than ever. If the regions, peoples and nations currently demanding more freedom seem to be driven by “cultural nationalism”, that in turn is driven by technological change plus global competition.

The second impact of these forces is the emergence of successful big cities and devastated small towns. In large cities with dense networks of information and culture, you can survive globalisation. In small towns it is harder. So the logical economic strategy is to create a “region” or small nation focused on one big city, and develop the suburban and rural economy in synergy with that city, not the bigger unitary state. If Barcelona were not a massive global success story, the impetus behind Catalan nationalism would be smaller.

This should not seem foreign to us in the United States. One of the most mind-boggling aspects of last year's presidential election, according to Mark Muro and Sifan Liu was that:

The less-than-500 counties that Hillary Clinton carried nationwide encompassed a massive 64 percent of America’s economic activity as measured by total output in 2015. By contrast, the more-than-2,600 counties that Donald Trump won generated just 36 percent of the country’s output—just a little more than one-third of the nation’s economic activity.

... with the exceptions of the Phoenix and Fort Worth areas and a big chunk of Long Island, Clinton won every large-sized county economy in the country.

Another way of saying this is that California (Los Angeles and San Francisco metro areas), New York (the city and environs), and Illinois (Chicago metro area) are thriving; meanwhile vast areas of the United States are accumulating grievances that Republicans exploit. Historically, more prosperous regions have been the tail that wagged the dog. It seems unlikely that the converse will endure for long.

Technology, globalization and cosmopolitanism, and mass migration aren't going to stop (however much the Trumpies want to stop the world so they can jump off). These forces are re-making our society; rote application of leftwing dichotomies derived from a different economy don't adequately capture contemporary conflicts. Eugene Robinson tries to name what this means for Democrats trying to assemble a majority:

He thinks Democrats need to convincingly project themselves as the "opportunity" party. That's sounds a bit over-technocratic to me; wasn't that what Hillary Clinton was offering? Winning Democrats will inspire hope that all of us, together, can enjoy the better future that prosperous areas glimpse even now.
Posted by janinsanfran at 5:00 AM

Interesting statistics. Most cities are liberal with mayors to match and that might explain this (now sanctuary cities to keep their cheap labor for hotels, gardening, construction, etc.)

Rural areas, where a lot of the food, timber, minerals, fuel for the country is produced, may not seem important economically because what they produce is not highly valued in terms of dollars-- relatively cheap food is important to this country. Wonder how long cities will survive without those vast wastelands of ignorance *s*. All joking aside, I think it's one of the huge divides-- cities and rural areas not respecting each other for what they contribute.

My son is in Barcelona now and again for his company. He thinks the Catalonians are naive for what they think can be done or what Spain might do to stop them. One thing is their jobs may not prove so profitable if companies fear unrest and pull out.

It's too bad regions can't declare independence if they want but I've read that France will fear then the Basques will do the same thing. The EU then is not likely to support this independence movement. Interesting times to say the least.

I watch how this situation in Spain is developing as I think of those promoting California withdraw from thr U.S. Union. Scotland, the Basques and others around the world, including the Kurds, have sought autonomy — even our Texas in years past — but meet with great resistance. Government corruption with individuals self-interest taking precedence, as with the current U.S. Administration, for example, continues to foment division that fosters such attitudes rather than find genuine unifying solutions.