Before wildfires slip down the memory hole among those lucky enough not to have suffered direct losses ... 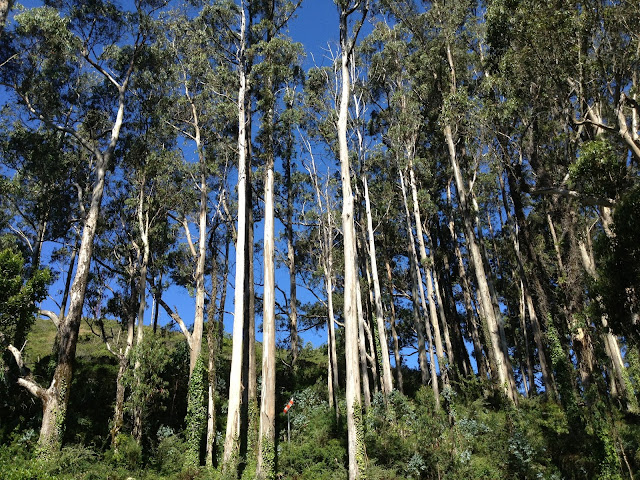 This story from Grist contextualizes what those of us who live in drought prone areas are facing.

Portugal’s wildfires this year have brought sharp focus on the escalating risk of these blazes — and what little officials have done to prevent them. Popular backlash prompted the resignation of a senior government minister and a formal request for a vote of no confidence in the ruling party. But they have also brought a lesson for the rest of the world: As climate change escalates, wildfires are a problem without an easy solution. (Just ask California.)

In a struggling post-recession Portugal, suppliers to its huge paper industry have accelerated a switchover from native species to faster-growing eucalyptus. Since trees consumed by fire can now be replaced more quickly, fire prevention — simple actions like trimming branches and clearing underbrush that could greatly reduce the country’s fire risk — has fallen by the wayside due to cost cutting. Add to that, more and more people are fleeing Portugal’s rural areas — leaving an aging population behind — it’s not clear who will be able to do that work even if resources were available to fund it.

“It really is a textbook example of wildfire as a socio-natural hazard,” José Miguel Pereira, a forest ecologist at the University of Lisbon tells Grist via email. Or to put it another way, human activity is making wildfires worse. These infernos are a product of our disregard for the fact that nature is now almost entirely something we’ve created — these disasters aren’t natural.

And as you know, our influence goes beyond simply neglecting tree management. There’s a growing consensus that the most important reason behind the recent surge in megafires is weather. September was the driest month in Portugal for at least 87 years, and this summer was among the hottest ever measured. All that’s led to a wildfire season that’s 525 percent worse than normal.

Climate models show that a warmer world will mean a drier southern Europe, and increasing ocean temperatures will likely bring more hurricanes further northward. That combination will boost the frequency of massive wildfires in Europe, especially in places like Portugal. On our current warming track, recent research shows the Mediterranean will cross a threshold into megadrought in the next few decades. Many of the trees in the region will likely go up in flames before next century.

What we can make, we can work to prevent.

Resist and protect much.
Posted by janinsanfran at 8:00 PM