From June 12-20, I was a member of a group of U.S. citizen peace activists organized by Global Exchange who traveled in Jordan and Syria in order to meet with people and groups, mostly Iraqi, to hear their experiences and views of the U.S. occupation of Iraq. This post is one of series that will report what we saw and heard.

Three men we met with in Jordan claim to have been tortured by U.S. forces while in detention for various periods. Obviously, I have no way to verify their particular stories, but I will affirm that I believe that they speak truth in the sense that the outrages described have all happened somewhere in Iraq at the hands of U.S. forces, even if not to these particular individuals. I report what they told us below. At the end of the article I'll add some of my own comments. 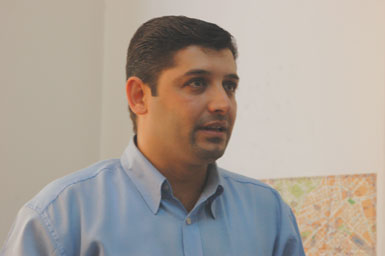 Muhamad al-Daraji of the organization Monitoring of Human Rights in Iraq introduced us to the three former prisoners at a meeting at the Amman Center for Human Rights. He reports that his organization assists the work of 28 Non-Governmental Organizations (NGOs) in Iraq, focusing on brutality in prisons, including those run by the U.S. occupation forces, by the Iraqi government, and, worst of all, by various militias. From what I could tell, his organization came largely from a Sunni base. 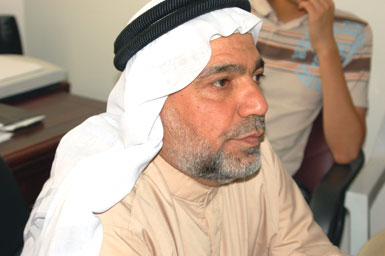 Sheik Abdul-Kareem Habdaraza, the leader of a Sunni mosque in Fallujah, runs an association that cares for women and orphans. He knows of 500 widows, many with seven or more children, all without a source of income and many without even housing. Now drugs are turning up in his community and the children are psychologically injured.

He thinks the U.S. troops are sex obsessed. They take the clothes off prisoners including women and children. When he was detained, women soldiers showed him their naked bodies. He also heard a woman screaming: "Don't take my clothes off." The Americans hang prisoners upside down, use electric shocks on their genitals. Because they do these things, now Iraqi militias do the same and worse. He thinks the militias were set up by Iran.

"People in Iraq think the Americans are bloodsuckers....The truth is bitter. Americans will be hated for generations. Sometimes I want to scream at you: we come from a civilization that has endured for 7000 years." 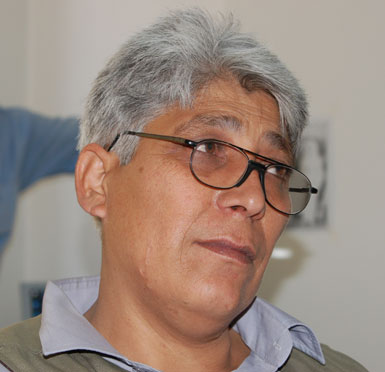 Haj Ali says he was the person in the iconic photo from Abu Ghraib showing the hooded figure with arms outspread hooked to electrodes and balanced on a box. He displays a hand that is missing one and half fingers; he claims this deformity matches the hand of the man in the photo. Some U.S. journalists have interviewed him and disputed this claim. He does look to be a much larger man than that photo seems to portray.

He didn't want to talk about his torture. He was arrested in 2003 and released six months later with no charges. He wanted to talk about the Association of Victims of American Occupation Prisons that he organized. There are now 76 U.S. bases in Iraq that have prison facilities. Militias that he claims have been instigated by Iran probably run another 150.

According to Haj Ali, the U.S. arrests people based on denunciations by people who have grudges against people they know; 99 percent of those arrested did nothing against the occupation, though many are individuals opposed to religious or ethnic sectarianism. He hears terrible stories every day at his headquarters in Amman. Recently he heard from a man released by occupation forces that they had arrested his wife, put her in another room and made him listen to them abusing her. 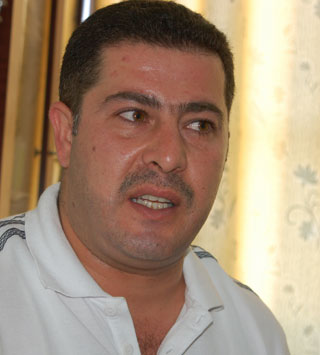 Basam al Akram was also held prisoner by U.S. forces. He is a Christian and Kurdish. When first arrested in 2003 he was kept handcuffed in a small room for 15 days. He asked for a Bible; guards gave him pornographic images instead. He believes that because he said he was a Christian, they asked him if he liked Jews, then hung him up on a cross. They also put a cat under his clothes to torment him.

Most of his difficulties now are that he is a refugee in Jordan and unemployed. He is married, but after what they did to him, he has trouble being with his wife. When he came out of prison, he looked so different his little daughter did not recognize him. After he was released by U.S. forces, he was kidnapped for ransom. The kidnappers were criminals who just wanted money. His family and tribe paid, but then he fled the country.
***
After the ex-prisoners shared their testimony, Muhamad al-Daraji explained that he had been on the city council of Fallujah. The U.S. Army troops that first came to the town met with civic leaders and worked out ways to avoid intruding on the mores and religious feelings of the townspeople. Then, in early 2004, the Army was replaced by U.S. Marines who scorned the previous agreements and proclaimed that if one Marine was killed, ten Fallujans would die.

He said he tried to make these U.S. soldiers understand that violence just bred more violence, but they wouldn't listen. Later in 2004, the U.S. used white phosphorous, an incendiary weapon, to subdue the resistance in the town. Much of the town was reduced to rubble and people made refugees in their own country. Now townspeople are seeing abnormal births. They have asked the United Nations and the World Health Organization to help them understand what is making people sick, but the U.S. won't allow an impartial investigation. In order to enter Fallujah, people must submit to fingerprinting and iris scans.

Al-Daraji is one of the many Iraqis who suspect that U.S. Special Forces along with the new Iraqi army did the bombing of the Shiite shrine in Samarra in February which touched off a terrible spate of killings of Sunnis by enraged Shiites -- and then a wave of revenge killings by Sunnis.

All these men believe the only hope for Iraq is for American forces to leave. They believe if the occupation ended, Iraqis, perhaps with help from international courts, could solve the problems between their communities.
***
The Bush administration's response to tales of torture like these has been to say that Al Qaeda or the Iraqi insurgency teaches men to make these claims as a way of attacking the U.S., as a form of "asymmetrical warfare." I can't help but believe that there is too much smoke for there not to be fire. We've seen the Abu Ghraib pictures; we read of misconduct indictments and massacres by G.I.s. At this point, given what we know is true, the burden of disproving these kinds of reports is on the U.S., not the men who make the claims.

Where U.S. troops are concentrated, they have overwhelmingly superior force. They can abuse prisoners if the command allows such conduct. And their command authorities do not seem to have stopped abuse. Perhaps some commanders even endorsed "tough measures." Too often, torture seems to have become U.S. policy in dealing with those deemed "enemies." As the occupying power, U.S. is responsible under international law for criminal acts by soldiers and by shadowy "interrogators."
Posted by janinsanfran at 6:24 PM

Professional interrogators
Suggest more information true
A game of handball may perforce
Elicit than torture accrue--
As, dealing with a zealous crowd
"Disinformation" is allowed,
Which, acted on, maybe
Leads to catastrophe.

Yet present policy reflects
A certain kind of mindset false,
Preconceived notion which connects
Action conceived within the pulse
Of rashness to be thereby true,
Despite what experts know and knew--
Including scientists
At whom are shaken fists.

It bears two flaws not incongruent,
As, the presumption others have
No motivation but that fluent
Within oneself, will not be brave,
Or capable too of deceit
When they with torture have to meet--
But also, themselves nurture
Perverted wish to torture.

The mindset of this weird cohort,
Cheney and crue, on terror long
But mercy and compassion short,
Believe strength comes from feeling strong,
When it is rather, without art
To be obtained by acting smart:
A pleasant apple orchard
Yields more than victims tortured.

Professional interrogators
From their experience do allege,
While leadership today ignores
And shuns the source, itself to pledge
To ways already proven flawed
Liking the latitude so broad
For pleasure it provides
Tanning somebody´s hides.