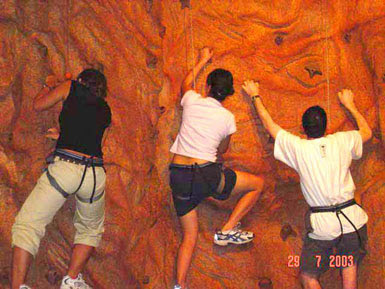 Edwards is the best positioned to ride the populist wave that is finally and rightly hitting our shores. By his willingness to repeal tax cuts for the rich to pay for universal health care, he is wagering that Americans will favor fairness and functionality over the anti-tax ideology of recent decades.

But Edwards risks sounding like the tribune for a smaller, more marginal group of Americans than he may intend to. Defending unions, he said it was time for Democrats to stand with workers who spent their "whole lives in factories, who worked in the mills." True enough, but Democrats also have to stand with workers who spend their whole lives at their keyboards. The father of Democratic populism, William Jennings Bryan, never made it to the White House, in part because he could never add the backing of industrial workers to his support among farmers. Edwards will do well among industrial workers; it's the post-industrial workers he needs to win over.

For her part, Clinton stressed that engineers as well as mill hands face outsourcing. She articulates the scope of globalization's problems more broadly than Edwards does, even if Edwards is more likely to confront those problems with more aggressively fair-trade proposals. Clinton's grasp of the breadth of our dilemmas is offset by the incrementalism of her solutions -- a disjuncture that may disturb Democrats who feel the time is ripe for bigger things.

And Obama? His broad indictment of contemporary politics has great appeal, I suspect, to young voters in particular. But the cynicism about government that he rightly condemns didn't waft in from nowhere. It's been a tool that the right has used to undermine the bargain Clinton spelled out, creating the desperate Americans Edwards talked about, to the end of distributing more wealth to the rich. The hope Obama personifies can be a powerful force -- but not when he counterposes it to specifics or to political struggle.

These people are operating from slightly different pictures of who the Democratic electorate might be. Let's unpack some.

Edwards really wants the voters represented by organized labor -- and that is a bigger block than the 12 percent of workers currently represented by a union might imply. When "union households" are taken into account, "labor voters" were 25 percent of the 2004 Presidential electorate. Come to think of it, I'm a member of a union household, since my partner, though simply a contingent worker at a university, is a union member. Twenty-five percent is a big block in a primary. Edwards is making inroads there; this support probably accounts for his current lead in Iowa polling.

Clinton essentially assures that she'll take things back to the good old days of Bill and the dotcom boom when globalization and innovation pointed to a rosy, but never very clearly envisioned, pain-free future. It was always a chimera for most workers. Even those who flew so high on it for a little while mostly crashed pretty badly when the bubble burst. She seems to be speaking to a white professional electorate who don't much like the current condition of the country, but who are not viscerally hurt by the direction of the U.S. economy. Her pitch seems transparent nonsense to me. But for folks who have been able to afford not to pay much attention and who yearn vaguely for a better time, a time before Bush, it seems attractive. A lot of it is simply name recognition. Name recognition will make her hard to beat in big state early primaries, like the proposed Feb. 5 California vote. Will Clinton be able to hold on to her current national lead?

Then there is Obama, playing to the national yearning for something transcendent to be in favor of. Democrats cleaned up at the polls in 2006 because, in most areas, people have come down solidly against the President. But most people are uncomfortable about being negative about the country and its leaders. Many very much want to be inspired. Obama is speaking directly to these folks. And by being Mr. Highroad, he is taking the only tack that lets him be something more than "the Black guy." Eventually, if he wants to be more than a curiosity, he'll probably have to speak directly about race -- something like the defense of his Catholicism that John F. Kennedy made to hostile evangelicals at the Greater Houston Ministerial Association. No African American is going to get elected President until (s)he can talk about race so comfortably that (s)he enables more white people (and brown people and yellow people and green people if there are any) to talk about it too. That's the challenge for Mr. Inspiration. Otherwise he is a flash in the pan.

None of these people have sold themselves to me yet; probably none of them will, Whichever one survives the national cattle call over the next year will get my vote in 2008. As will any other not-Republican who somehow topples the front runners and squeezes out a long shot Democratic nomination.

Posted by janinsanfran at 10:04 PM