Hillary breezes through, in gusty weather 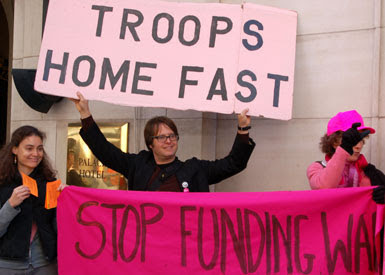 Inside and out, the good people of Code Pink, dogged the candidate with their message Stop Funding the War! 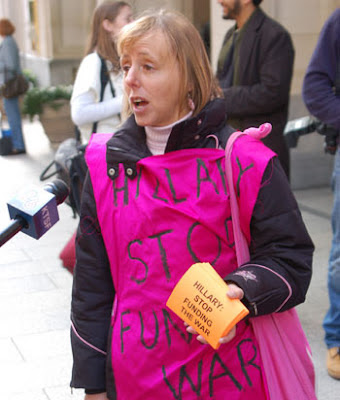 Medea Benjamin made sure the protesters' message got to the media.

The senator's day had not begun well. The local paper headlined on the front page: "Message to donors: don't play the field." The article was positively catty.

Hillary Clinton... expected in her presidential campaign to tap the same liberal Democratic sources of money in Hollywood and elsewhere that backed her husband's successful bids for the White House. And, [Arianna] Huffington and others say, the Clintons tend to play a style of politics that is all or nothing -- you're my friend or my enemy. ...

"The Clintons have made it very clear that, in the political world, no dalliances are allowed. There is zero tolerance for that,'' Huffington laughed. "It's sheer loyalty versus sheer fear.''

And it's reinforced, she said by the "constant e-mails being sent out about the senator's poll numbers, along with the implication that 'if you give any money to anybody else, you're on the outs.' And that when she is the nominee, and when she's the president, she will remember."

Not perhaps quite what Candidate Hillary wanted on arrival in San Francisco.

Watching all this, what interested me were the folks who attended Hillary's luncheon, running a very polite gauntlet of the Code Pink women. 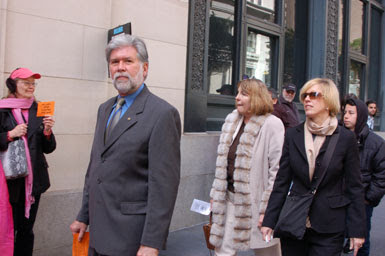 Our fat cats think of themselves as "liberals" I am sure. That means Democrats, I think. 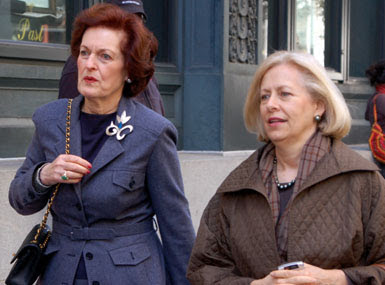 Though I don't think by and large they'd be taken for you and me. 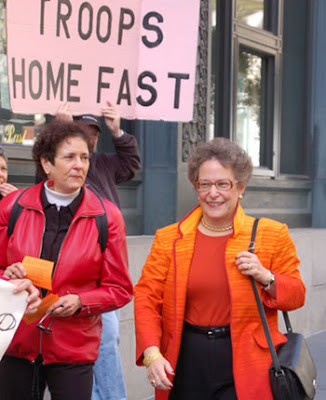 Some took interacting with the antiwar group better than others. 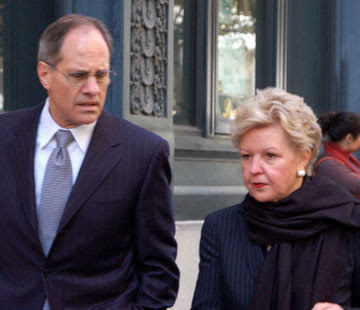 Some seemed bent on ignoring any intrusion from the hoi polloi.

Oddly, Clinton's somewhat ambiguous stance on the Iraq war got a boost from the other side of the fence today. Gov. Arnold apparently offered

“people are too tied down with analyzing” whether Hillary Clinton’s vote to authorize the Iraq war was a mistake.

“Is that what makes the country operate well, if she becomes president?” he asked. “How you twist that or spin that? We should look at what has she done as senator. What has Barack Obama done as a U.S. senator or [a state] senator. What has Rudy Giuliani done? What has McCain done? You’ve got to judge people not by this one little thing.”

Since Schwarzenegger promised in the same interview that he'd endorse whoever the Republican nominee is, so I'm not sure he was trying to help Clinton.

Best sighting of the day on one of the CodePink women, and just about wrapping it all up I think: 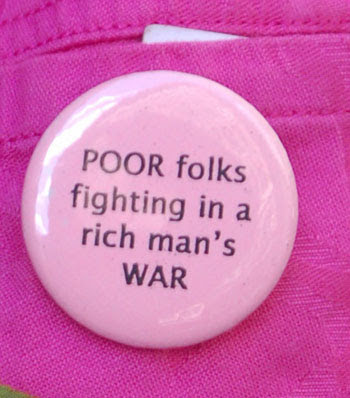 Posted by janinsanfran at 6:02 PM