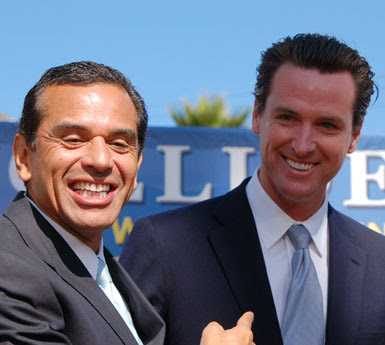 In the San Francisco Chronicle, political reporter Carla Marinucci describes the fallout from Mayor Gavin Newsom's admission that he'd had an affair with an employee who was also the wife of his campaign manager (now hastily departed) as "a mushroom cloud over his promising political career." She quotes an unidentified Republican political consultant:

"This guy is no longer a credible candidate to be governor of California,'' said one of the Republican strategists. "It's an extraordinary good day for (Los Angeles Mayor) Antonio Villaraigosa ...

Screwing his friend's addicted wife isn't going to kill Newsom at the polls in this city. Folks aren't going to pick a mayor based on who he fucks. We don't do that. But he may be in trouble for another reason. Before he was elected, he was generally considered a lightweight. Sure, he made an attractive front man for developers, landlords, and downtown business interests who are always afraid the raging rabble will rise up and take over "their" jewel box financial hub. But his program was just poll tested buzz words and wedge issues (clear out the dirty homeless now!)

Unexpectedly, Newsom has turned out to be a somewhat interesting mayor. Neither of his immediate predecessors, Frank Jordan and Willie Brown, showed any interest in trying to frame policy to make the city work. Newsom seemed, even if I disagreed with much of it, to be actually trying to govern. On good days, he even worked with progressive supervisors, notably on Tom Ammiano's universal health insurance plan.

He also had a moment of political brilliance in fronting for gay marriage. No -- this was not politically risky. In 15 years this will be a no-brainer -- note that today, after 15 years of "don’t ask, don't tell" the Harris poll reports that 55 percent of the population thinks gays should be able to serve openly in the military. Attitudes are changing rapidly -- Newsom smartly seized an opportunity to appear courageous and forward-looking with only short-term risk.

How did a lightweight prettyboy do so relatively well as mayor? It seems very likely that he was highly dependent on having smart, dedicated people around him who perhaps found opportunities that a more fully formed mayor might not have allowed. And it is the continued loyalty of this entourage that is threatened by the disclosure of Newsom's affair. Who wants to toil to promote a guy who'll betray you to follow his dick? Only ambitious schemers. Newsom might very well be able to rehabilitate himself politically over time by demonstrating maturity and policy accomplishments, but he may have a hard time finding aides whose quality can compensate for his weaknesses.
***
So is Los Angeles Mayor Antonio Villaraigosa the beneficiary of Newsom's at least temporary political eclipse? Again, maybe. As a San Franciscan, I'm not as close an observer of Villaraigosa, but from up here, he doesn't look to be sweeping all opposition aside or winning friends. His signature policy initiative, a school takeover law has crashed in the courts. He has alienated African-Americans by vetoing a settlement payment to an Black firefighter who was fed dog food in a hazing incident. The controversy revived scrutiny of a longstanding racist, Animal House culture in the fire department; the chief resigned; and Villaraigosa appointed a Black interim chief -- only further stirring the hornet's nest.

African American leaders questioned whether the mayor had tapped the incoming chief as a public relations ploy to mollify critics upset with him for vetoing a $2.7-million legal settlement for a black firefighter who sued the city after co-workers fed him a spaghetti dinner laced with dog food....

Among those wondering about the mayor's intentions was the Rev. Eric P. Lee, executive director of the Southern Christian Leadership Conference of Greater Los Angeles. "This was a move to quiet the storm of controversy," Lee said. "I'm concerned with the shallowness with which this seemed to come about."

For a politician whose stock in trade is having been elected through a Black-Brown alliance, this is pretty devastating stuff.

I'm afraid California Democrats are still looking for a new generation of standard bearers who have more to offer than being "not the Republican." The Governator has proved that Dems are vulnerable until we do better.
Posted by janinsanfran at 10:26 PM