Mourning for an undefended border 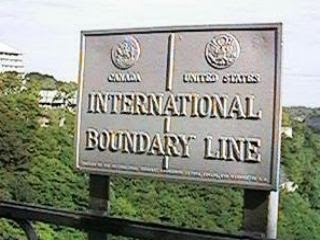 These stories still get to me.

[Ibrahim] Dabdoub has been detained more than three times as he returned from Canada after visiting his parents and in-laws...

“I have never been in trouble with the law,” says Dabdoub, “I have never been arrested. I have a reputation with my family, close friends and business associates as being a stickler for following rules and valuing the integrity of the law.” ...

The United States, which recently swore him in as U.S. Citizen _ it was one of the proudest moments of his life – is directly targeting him with no just cause, because he is an Arab-American.

The first time that Dabdoub experienced the interrogation, about five officers gathered around him and his vehicle. One of the officers asked him to put his hands on the back of his car and made him spread his legs. He was frisked and then handcuffed.... After 30 minutes of being held, he asked an officer for the reason for his treatment. The officer replied by asking him questions about his ethnic background and his travels to the Middle East.

Par for the course as the United States becomes a fearful place, hiding behind walls and security fences, police, border patrols, and soldiers, trying desperately to shut out the world with which we are interdependent.

When I was a child in Buffalo, we were all very proud to live along and frequently cross "the world's longest undefended border." Soon we will need passports to make the crossings that used to be an unimpeded part of everyday life. This seems a sad and almost certainly unnecessary development.

The poet William Stafford might well agree, had he lived to see this present. Several weeks ago I heard Garrison Keillor read a poem of his that seems to speak directly to our predicament.

At the Un-National Monument Along the Canadian Border

Birds fly here without any sound,
unfolding their wings across the open.
No people killed-or were killed-on this ground
hallowed by neglect and an air so tame
that people celebrate it by forgetting its name.

Stafford knew what was and what ought to be.

Posted by janinsanfran at 9:07 PM

Just had a friend turned back at the Peace Bridge crossing a couple days ago. She was fingerprinted and her tattoos were photographed. The Immigration officer who called me did not initially identify himself which only added to the problem. It was only after I asked who he was and why he was asking about my friend that he said he was with US Immigration.