Korea accord and the peace movement 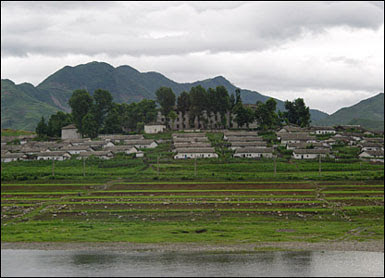 From a North Korea photo essay at BBC Online.

Today the War Times group I work with sent out this email blast. I think that text is worth posting here as reminder to those of us who make up the U.S. peace movement that we have even more to do than we sometimes realize.

U.S. Enters the Reality Zone on North Korea
Asia Times used the headline above in covering the Agreement reached by the Six-Party talks February 14. The Times interviewed Graham Allison, director of the Belfer Center for Science and International Affairs at Harvard's John F. Kennedy School of Government, who said: "This is a significant step for the [George W] Bush administration into the reality zone, a strong departure from its previous failed approach and a good first step."

No surprise that the Agreement is already being fiercely attacked by the Neocon right wing. Bush's own former U.N. Ambassador John Bolton said the pact "contradicts fundamental premises of the president's policy". For once he's right: the pact not only contradicts Bush's previous "our-way-or-no-way" stance against North Korea, its use of negotiation and multilateralism to solve disputes is in direct contrast to the administration's usual reliance on "pre-emptive" attacks, regime change, unilateralism and war.

Also, for a window into Korean realities, check out two articles by Miriam Ching Yoon Louie written after her return from North Korea on a delegation sponsored by Nodutdol for Korean Community Development last year. "This Close" (co-authored with Yoon Mi Ran) speaks to the emotional and sensory experience of returning to half of one's divided homeland; "North Korea: Behind the Bomb Blast" shares conversations Miriam had with folks from various walks of life and is "dedicated to Americans wanting to know 'why do they hate us?'"

For five long years, the impending and actual Iraq disaster has trapped the U.S. peace movement: we've focused exclusively on working toward U.S. withdrawal from that unhappy country. That wasn't wrong. But necessity has distracted us from projecting what a more peaceful, post-imperial, world might look like. But that too must be a task for a "peace movement."

This Korea agreement reminds us that we need to be about not only "out now" but also about projecting a vision of how very different countries and societies can share a finite, fragile planet with some fairness and respect.
Posted by janinsanfran at 10:10 PM