No escape from Iraq for Palestinians 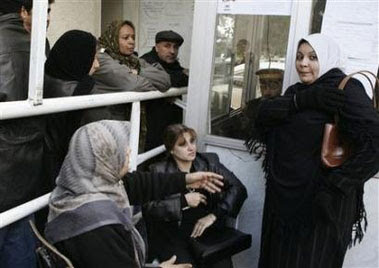 Iraqi refugees asking for political asylum gather outside the United Nation High Commissioner for Refugees office. These are lucky ones who somehow made it to Damascus. (Khaled Hariri/Reuters)

Travel in Jordan and Syria last summer gave us one insight that at the time was not something highlighted in U.S. media coverage of our nation's Iraq war: we've unleashed a flood of desperate refugees across the region. Now this is a commonplace. Literally millions are trying to get out of a country where, as James Glantz reported in today's New York Times, life amounts to trying to survive on "a deadly dartboard."

The International Herald Tribune recently attempted to quantify the situation:

To calculate the price that Iraqis have paid for the U.S. misadventure in their country, you have to deal in big, round, horrifying numbers. ... Driven from their homes within Iraq: 1.8 million. Fled to other countries: an additional 2 million and growing. The number of Iraqis who have found refuge in the United States is easier to pin down. America has admitted a total of 466 Iraqi refugees since 2003.

Numerous news organizations have begun pointing out that the people who have helped U.S. forces and U.S. media particularly deserve some consideration as Iraq goes up in flames. And they do. And they are not getting it because to facilitate their escape would be an official admission that the U.S Iraq enterprise is out of control, kaput, down the drain. So our friends should die for GWB's lies.

Meanwhile, IRIN, the news organization associated with the UN Office for the Coordination of Humanitarian Affairs, is trying very hard to draw attention to another set of refugees created by the Iraq disaster.

BAGHDAD, 1 February (IRIN) - The number of Palestinians stranded at the Iraq-Syria border has risen to 700 as more refugees flee the escalating violence in Baghdad, the United Nations Refugee Agency (UNHCR) said on Wednesday. "Another 50 Palestinians have fled to the Iraq-Syrian border following a traumatic week in Baghdad, bringing the total number stranded at the frontier to about 700," Jennifer Pagonis, UNHCR spokeswoman, said at a press briefing in Geneva. ...

UNHCR said a group of 356 Palestinians has been in no-man's land between Iraq and Syria since May, and is living in a makeshift camp that was erected there. The second group of more recently arriving Palestinians, which now numbers around 340, is stuck in another improvised camp, al-Waleed, on the Iraqi side of the border. ...

"They are living in tents in very dismal conditions during this cold weather season, and have no access to potable water and medicine. Their children have left schools and they will be an uneducated generation in the future," al-Kasous said.

UNHCR is concerned that Palestinians have been systematically targetted and threatened by authorities and militias. The refugee agency said they face constant threats from death squads. ...

On 16 January, Iraqi security forces broke into two buildings in Baghdad that are rented by UNHCR for Palestinian refugees and arrested 30 men. But they were released shortly.

In another incident in Baghdad's central district of al-Batawyen, Interior Ministry forces broke doors and windows of a building and arrested 17 Palestinian men. A third incident took place in al-Amin district in the eastern side of the capital on the same day and 13 Palestinian men were apprehended by Iraqi security forces.

"We again urge the international community, including neighbouring and resettlement countries, to help find a humane solution for these refugees who are persecuted inside Iraq and have nowhere to go," UNHCR said.

Having lost their own country, these folks have become just more hidden collateral damage of U.S. aggression.

Posted by janinsanfran at 11:45 AM