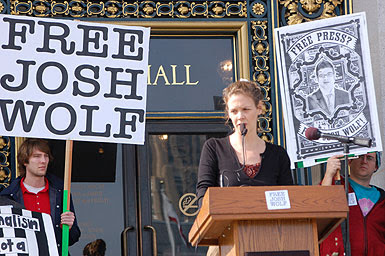 Journalist Sarah Olson, who just fought off a subpoena herself, speaks at a City Hall press conference.

Josh Wolf has been locked up for 169 days. As of today, Wolf became the longest-imprisoned journalist for contempt of court in U.S. history. He is a San Francisco video blogger who filmed some of a mini-protest march in the Mission district in July, 2005. (I live in this neighborhood; I wrote about the events at the time here.) A TV station bought some of his footage. You can see that story here.

So far so good.

Though a police office got hurt and a police vehicle was vandalized, that would have been the end of it, except that the Federal government decided to make an example of Wolf. Under California's journalist shield law, Wolf could not be forced to reveal any other pictures he took that night. But the vandalized police car had been paid for by the Feds, so they convened a Federal grand jury about this tiny local incident and tried to make him turn over his out-takes. Wolf refused. Last August 1 he was declared in contempt and sent to Federal prison. Appeals have been denied -- he is expected to be held until the grand jury's term expires in the summer, or perhaps longer if the U.S. Attorney chooses to be particularly vindictive.

Perhaps because San Francisco Chronicle reporters Mark Fainaru-Wada and Lance Williams are also threatened with prison because they won't reveal who leaked them testimony about Barry Bonds' steroid use, the mainstream Northern California press has been quite supportive of Wolf. Along with those two, Wolf was named Journalist of the Year by the Northern California Chapter of the Society of Professional Journalists. Reporters without Borders, the Newspaper Guild/CWA, the National Lawyers Guild, and the American Civil Liberties Union have all called Wolf's imprisonment an effort to undermine press freedom.

Assistant U.S. Attorney Jeffrey Finigan disagrees. To him, Wolf is just a dirty little blogger with no rights. In a Jan. 29 court filing,

he called Wolf "delusional'' and said additional time in prison might help him realize that he was not a genuine journalist, but "simply a person with a video camera who happened to record some public events.''

Even in prison, Josh Wolf has a blog. Go visit him. Those of us on the outside need to stand by a jailed comrade whose is defending our legitimacy.
Posted by janinsanfran at 5:02 PM

Not that it particularly matters, but Josh is also a sweet, smart kid. My prayers are with him.

very glad to see you're also posting on this