"What do the Yanks care about a dead Arab?" 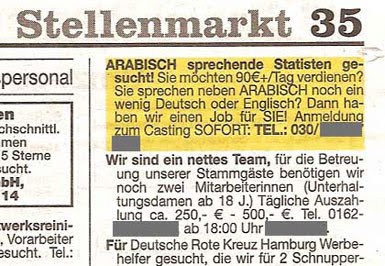 Apparently the Pentagon plans to hold war games in German Bavaria in late March and early April for troops on their way to Iraq. So it is looking for a few Arabic-speaking actors to take part in the training. Their job: to play C.O.B. -- civilians on the battlefield in U.S. military-speak -- in simulated urban warfare, speaking only Arabic and meeting the invaders with suspicion and incomprehension.

According to Der Spiegel, the casting service they've employed is having a hard time.

"Does anyone here have anything against working with Americans?" the gaunt German man asks the 29 Arab men and two women sitting in a bleak white-painted room in Berlin.

Several people answer the question by standing up, taking their coats and leaving the room.

"You can leave any time," the German tells the others, somewhat forlornly. ...

A Lebanese man wants to know how the roleplayers will be protected and if the press is allowed to be present at the training sessions for security. "Who guarantees that we will be helped if the Americans make a mistake?" he asks the room. "What do the Yanks care about a dead Arab?"

The mood becomes agitated. "No, not a single word of the operation will reach the outside world, there are no media there," says the German agent. He tries to reassure the potential actors: "But you'll be employed by a German firm. There are strict security precautions."

The actors are asked to work for three weeks for $117/day, with some exercises running 24 hours straight. This was a tough sell the day Spiegel infiltrated the casting call; only four of twenty-nine prospects signed up for further security screening for the job.

I guess we should be glad they weren't advertising for Farsi speakers ... yet.

Posted by janinsanfran at 4:03 PM