Two peas in a pod 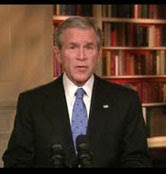 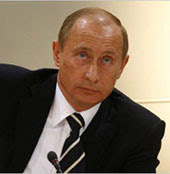 "We are witnessing an almost uncontained hyper-use of military force in international relations," Putin said. "One country, the United States, has overstepped its national borders in every way." ...

Arguing that the U.S. was ignoring international law in its use of military power, a clear reference to the invasion of Iraq, Putin said the legal constraints that once protected smaller, weaker nations were no longer viable.

"This is very dangerous," he said. "Nobody feels secure anymore. No one can feel that international law is like a stone wall that will protect them. Of course, such a policy stimulates an arms race. The force's dominance inevitably encourages a number of countries to acquire weapons of mass destruction."

In most of the world it would be hard to find significant numbers of people who disagree with this assessment. Think Iran, North Korea -- and of course Russia itself, bristling with nukes.
***
About a month ago, the New Yorker published a chilling profile of Anna Politkovskaya, the murdered journalist whose articles uncovering of the crimes done by Russia in Chechnya had made her an enemy of the state. If you are even slightly interested in the evolution of that unfortunate country, do read it all. It chronicles how, under Putin, the forms of the "democracy" thrown together in the post-Soviet state have been nearly completely eroded by a secret-police based autocracy. Too much of what Michael Specter describes seems eerily familiar.

"I really consider the president of the United States my friend," Putin said. "He's a decent man, and one can do business with him."

"I was able to get a sense of his soul, a man deeply committed to his country and the best interests of his country," Bush declared after their 2001 visit.

Television... is the only way the vast majority of Russians get news.

According to the most recent survey of U.S. news consumption habits, 57 percent get news from TV. However high numbers looked at several news sources and 43 percent read a newspaper, including both print and online editions.

Pew Center for the People and the Press
[my summary]

Last July... the Duma passed a law, introduced by the Kremlin, to permit the assassination of "enemies of the Russian regime" abroad. For people like Boris Berezovsky, whose hatred for Putin has become an obsession, the new law explained [the Litvinenko assassination in London].

"I want justice," [Bush] said after a meeting at the Pentagon, where 188 people were killed... "And there's an old poster out West that says, 'Wanted: Dead or Alive.' ...

The blunt, Texas-style rhetoric, delivered off the cuff, came a day after Vice-President Dick Cheney said he would willingly accept bin Laden's "head on a platter".

[When asked about Politkovskaya after her murder, President Putin] responded curtly, "She was well known in the media community, in human-rights circles, and in the West, but her influence on political life within Russia was very minimal. . . . In my opinion, she was too radical, and by virtue of this radicalism she did not have a very strong influence on political life within the country, and especially in Chechnya."

The President's detached and clinical approach to the murder infuriated Politkovskaya's colleagues and shocked her family. "It was like he was saying she was of no value to the Kremlin, so she didn't deserve to live," Elena Kudimova told me. "I don't care what he thought of her work, but what kind of man speaks that way about the dead?"

George Bush took a 2 hour bike ride on Saturday, and when he got back, he was asked how he could go for a two hour bike ride when he doesn't have time to meet with me, and he said: "I have to go on with my life." (Austin Statesman, August 14)

WHAT!!!!!????? He has to get on with his life!!! I am so offended by that statement. Every person, war fan, or not, who has had a child killed in this mistake of an occupation should be highly offended by that remark. Who does he think he is?

In the late nineteen-eighties, at the urging of Mikhail Gorbachev's Kremlin, Communist newspapers began publishing exposes of Russian politics and the war in Afghanistan, and stories about many of the "blank spots" of Soviet history, going back to Lenin. The dull, formulaic journals of Soviet life—Izvestia, Literaturnaya Gazeta, Ogonyok, and Moscow News—suddenly became engrossing. Each morning, huge crowds would gather in Pushkin Square to read the papers, discuss the events of the day, and argue about what might come next.... Euphoria cannot sustain a business, however.

The principal value of the blogosphere is that it democratizes our political discourse almost completely. Anyone can become a "pundit," find an audience, report facts, create a community of like-minded citizens and activists, and influence the public discourse -- all without having to mold oneself into what is demanded by The Washington Post and without having to care about pleasing the editors of Time Magazine.

In that regard, the blogosphere enables a very potent freedom.

But any competing system that exists outside of the national political and media institutions has to be financially self-sustaining.

[In Russia,] the practice of writing biased news articles for money became routine even at the best papers.

[According to Eric Boehlert,] key factors included the consolidated media landscape in which owners were increasingly -- almost exclusively -- multinational corporations; the same corporations anxious to win approval from the Republican-controlled federal government to allow for even further ownership consolidation.

Lapdogs: How the Press Rolled Over for Bush

By 1996, with a Presidential election scheduled, [Russian President] Yeltsin's popularity ratings had fallen into the single digits. ... the oligarchs and the journalists they employed conspired to pour limitless funds into Yeltsin's campaign, and insured that the networks would provide only favorable coverage. ...

They wanted to drive Communism from Russia forever; impartiality, they felt, was too decorous a response to what they saw as a national emergency....

Andrei Norkin, a former anchor for NTV, told me..."And, even if we did not see why, the authorities understood at once: mass media could very easily be manipulated to achieve any goal. Whether the Kremlin needed to raise the rating of a President or bring down an opponent or conduct an operation to destroy a business, or a man, the media could do the job. Once the Kremlin understood that it could use journalists as instruments of its will, and saw that journalists would go along, everything that happened in the Putin era was, sadly, quite logical."

[Media baron Rupert] Murdoch was asked if News Corp. had managed to shape the agenda on the war in Iraq. His answer?

"No, I don't think so. We tried." Asked by Rose for further comment, he said: "We basically supported the Bush policy in the Middle East...but we have been very critical of his execution."

"There is no censorship—it's much more advanced. I would call it a system of contacts and agreements between the Kremlin and the heads of television networks. There is no need to start every day with instructions. It is all done with winks and nods.

[The Libby trial reveals] such an amateurish approach to news management, in fact, that you have to wonder how the Bush administration and, particularly, Cheney's office, got away with it for as long as they did. If you recall that there always are a certain number of high-level Washington journalists willing to play ball with any form of transparently self-interested deceit for the sake of a Page 1 byline or a few minutes of prime airtime, you don't have to wonder very long. ...

The lesson to take away from this week's unintended seminar in contemporary journalism is that the vice president and his staff, acting on behalf of the Bush administration, believe that truth is a malleable adjunct to their ambitions and that they have a well-founded confidence that some members of the Washington press corps will cynically accommodate that belief for the sake of their careers.

It's a sick little arrangement in which the parties clearly have one thing in common: a profound indifference to both the common good and to their obligation to act in its service.

Posted by janinsanfran at 7:43 PM

aren't you as tired of sighing as i am? isn't it impeachment time now? not a question, just a matter of will. thanks for all the reading.