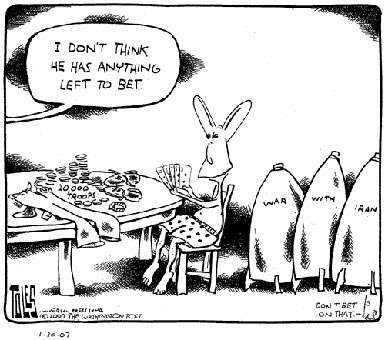 I've been recruited, or perhaps volunteered is the right word, to write a draft for a flyer. War Times/Tiempo de Guerras used to publish an antiwar newspaper; now we generate flyers as downloadable PDFs and send out monthly email updates. The project has always sought to supply print media materials in English and Spanish that a far-flung peace movement could use, but which local groups had trouble creating on their own. We believe, in our own small way, we've helped to delegitimize the misnamed U.S. "war on terror" and the Iraq fiasco. Now we need to make available a flyer on Iran.

This post isn't going to be that flyer. Rather, I thought it might be interesting to try to tease out how I think through drafting such a thing because the principles involved are probably applicable to creating any form of print propaganda -- and for all the new media we have, print materials are still useful for organizing.

Who is the audience?
This question comes before any others because it constrains the possible answers to other questions. Fortunately, War Times/Tiempo de Guerras has a general idea about that one: we view our audience as ordinary people of good will who are open to non-mainstream points of view about the wars, but who don't have the time or energy to take in much information about current events. Think large parts of the U.S. working class, with an awareness that many of those people are of color and/or speak Spanish as a primary language.

I suspect that these folks don't have much real information; they are likely to be among the 57 percent of us who depend on local TV for news. So on Iran, I suspect I'll be writing to something close to a blank slate with a vague sense of menace hanging around the edges. I can be sure these folks have no idea or that On the other hand, they also don't know about or remember that Sort of a wash.

What is the flyer for? What is the simplest possible message?
Since you can never do everything on one piece of paper, the tighter answer you can give to this question, the better. And since we haven't put out anything about Iran before, the possible answers to that question are very broad. "Attacking Iraq is BAD" works generally, but what approach to take?

Some possible tacks to follow: What a list of possible themes for a leaflet -- and the one thing I'm sure of is that I can't throw all of them at any reader. Too much complicated, slightly crazed content just makes people give up. Maybe that's the theme. As Josh Marshall said

I've always viewed the fears that the White House would try expand the war into Iran with a mix of deep skepticism, fascination and latent foreboding. Logically, it makes no sense on any number of counts. But the last half dozen years has taught us all that that's simply not a significant obstacle. There are any number of ridiculous gambits I was sure these guys wouldn't try before they did try them.

Again, the 'sensible' interpretation of what's happening right now is that the administration is trying to regain control of the situation in Iraq. And to further that aim they're rattling their sabres at Iran to get them to back off and stop making trouble. That's the sensible explanation. But we're not dealing with sensible people.

That's what we're up against here. The possibility that our rulers will take the U.S. into Iran is not rationally explicable -- and that makes it hard to get people to repudiate something anyone with a smidgen of sense knows makes no sense.

As far as the flyer goes, it will be necessary to offer all these possibilities (and more) to my co-workers in War Times and then hope to prune the result as much as possible. This is not the best way to write a flyer, but circumstances permit nothing else.

What does the flyer ask readers to do?
There is no point in writing and distributing political information if we don't try to give people an opportunity to act on what they read. In this case, that's probably not too hard.

All of us need to demand that the Democrats we've newly put in charge of Congress get in the way of any plan to attack Iran. I've seen suggestions that we need a new "Boland amendment" -- an ironic notion. During the 1980s, opponents of Ronald Reagan's covert war on Nicaragua attached a prohibition on funding it to an appropriation bill the president had to sign, reluctantly. In order to get around this prohibition, U.S. covert operators sold arms to Iran to get cash to buy arms for the U.S. proxy army in Nicaragua. What goes around comes around?

Moreover, folks need to connect to their local peace organizations (there are probably over a thousand around the country) and to national groups such as Code Pink and United for Peace and Justice

Make sure the flyer is attractively designed.
If you want people to read it, at the very least it has to be clean and legible.

How is the flyer going to be distributed?
It would not be worth going to the trouble to produce a flyer unless you have a way to get it out into the world. I've seen political groups miss this truism. Fortunately, WT/TdG is a distribution system with a large email list and many contacts with local peace groups.

The prospect makes me tired, but I think I will be able to draft this flyer.... Suggestions for brief content are most welcome.

President Ahmadinejad's real views are summarized on this website: ahmadinejadquotes.blogspot.com

Thanks anon -- that is a useful source.