Parking in the city 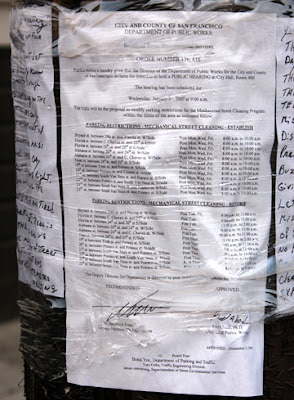 It started with illegible, unintelligible flyers on poles. The San Francisco Department of Parking and Traffic (DPT) announced their plans to increase street sweeping in our neighborhood -- and concurrently increase the number of hours a week that car-owning residents had to find alternative locations for their vehicles. 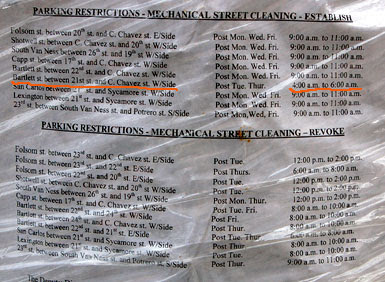 The item that really caught my attention (underlined) was their intent to label one side of my residential block "no parking" between 4-6 am several days a week! Having to move a car during the day I can deal with, but this amounts to outlawing overnight parking for most of us. 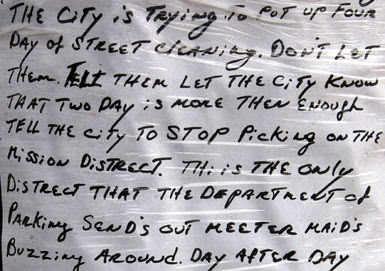 I wasn't the only person disturbed by DPT's plans -- soon a plaintive homemade flyer turned up next to the official postings. The flyer's author believes not only that alternate side of the street parking regulations are mostly about collecting fines for parking tickets, but also that DPT is picking on the Mission.

Next I found this authentic looking "ticket" on under my car's windshield wiper. The faux ticket announced the time and place of DPT's hearing. Opposition was mobilizing. Clearly I had to be there. 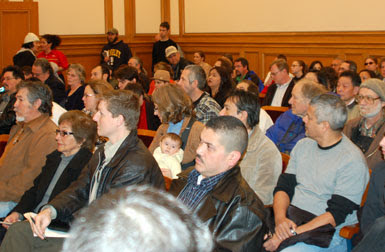 So last Wednesday morning, I was back in Rm. 400 of City Hall which was full... 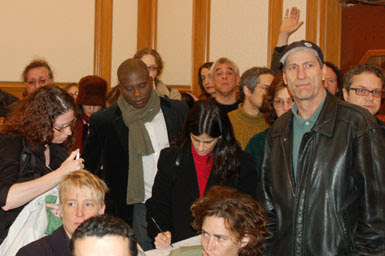 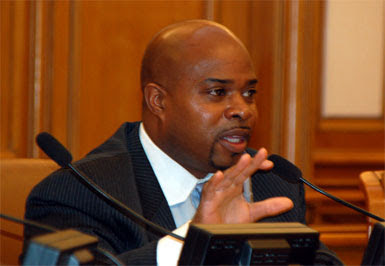 A solitary hearing officer faced the anxious and disputatious crowd. Couldn't city authorities at least field some help for this guy? 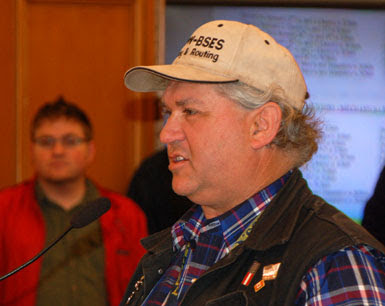 A DPT worker explained the Mission was simply dirty -- they have to send multiple trucks out with the sweeping machines to pick up the garbage left on the streets. No mention that landlords don't pay for garbage, so poor tenants are tempted not to pay the exorbitant fees our private garbage monopoly pays for dumping their cans. Some folks simply put their trash next to the city cans to avoid the fees. This isn't great, but the city does still house some poor people.... 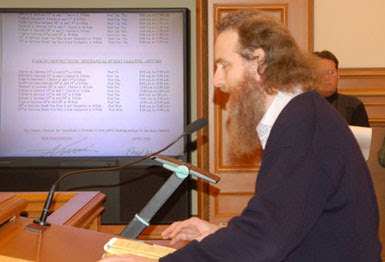 Then the people began testifying. This gentleman urged even more parking restrictions to discourage car ownership and use, in conformity with the city's "transit first " policy. He was not popular with most in the room, but I have to say he has a point. We are choking on our cars. 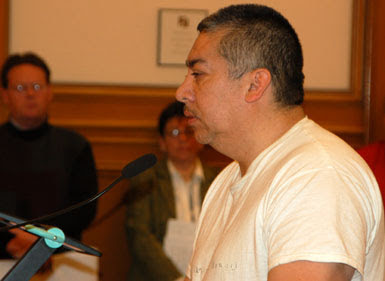 This fellow gave the opposite point of view. He experiences the parking rules as a tax -- and since he works every day driving a bus for the city, he finds it very unfair that parking tickets should cost him hundreds of dollars a year.

Several other people got up to explain that if "no parking" hours were increased, they would have to drive their cars to work which they don't do now -- because increased driving would be their best way of avoiding tickets. 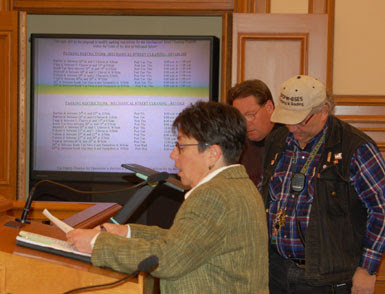 Somewhere along the line, a parking bureaucrat got up to explain that there were some mistakes on the posted notices and they didn't really intend to make us move cars from 4-6 am -- unless maybe they did. I was unconvinced. 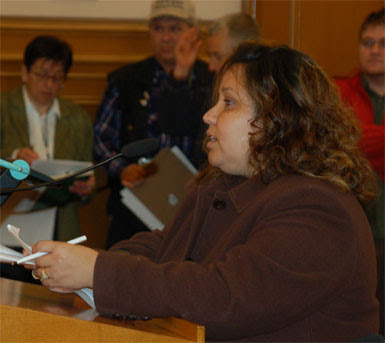 One of the opponents pointed out that if this was the case, they have violated their own sunshine rules and ought to repost the true plans and hold another hearing. Meanwhile other organized opponents went off to try to pull in our district supervisor, Tom Ammiano.

I'll live through it if they put in more mechanical street sweeping, though watching the machines blow the dirt around, I am not convinced that they clean anything. (The slave labor [workfare] human sweepers do most of the actual trash pick up that gets done, not the machines.) I can probably avoid tickets, because I work at it.

But I don't know what I think the answer is about city parking. We have a society in which just about every adult needs a car either for work, errands, or a sense of the possibility of leisure. Car Share can help -- but I don't think we've gotten to where it can work for most people most of the time. Public transportation is spotty and irrational; for example, lots of janitorial workers can't afford to live in this city, but the transit system stops at night, so they have to drive from their suburban residences. The Mission is a transit hub, but it is very difficult to use public transit to get to the west side of the city.

As an experiment, I've decided to keep a diary of what I use my car for over the next month -- will report it on the blog when I have some data. I can't imagine not having one, but it would be good to know why. And when, and if, we get subjected to more parking restrictions, I'll report that as well.
Posted by janinsanfran at 2:55 PM