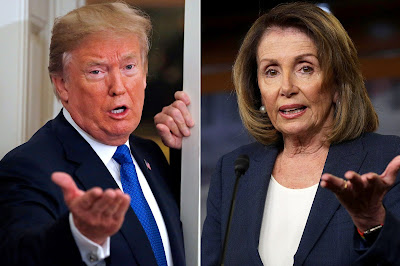 So the U.S. political system is limping toward impeachment. The threat to democracy and rule of law is so great that my brilliant, infuriating, decent, and sometimes wise Congresscritter has invoked one of our underappreciated, authentically radical, founding generation:

The president must be held accountable. No one is above the law.

Getting back to our founders, in the darkest days of the American Revolution, Thomas Paine wrote, “The times have found us.” The times found them to fight for and establish our democracy.

A couple of days ago I had flagged a bit of game theory about impeachment by politics scholar Daniel Drezner which still seems worth pondering:

It is safe to assume that Trump will continue to abuse the powers of the presidency as long as he is in office. The Ukraine example shows that he is not above using presidential authority for partisan gain. Furthermore, when he is not doing those things, he is pursuing other policies that harm the U.S. economy and the national interest.

Would impeachment stop any of that? No, not directly. What it would do, however, is distract the heck out of him. To say that Trump can be easily distracted would be an understatement — his short attention span occupies a healthy portion of the #ToddlerinChief thread. Sharpiegate exemplified how Trump obsessed about a small thing so much that it became a more scandalous thing.

... So why impeach Trump? Because he will obsess about it. The moment it becomes a live option, the moment a trial in the Senate seems conceivable, he will talk about nothing else. He will rant to his staff and bore foreign leaders about it. He loves a fight. And every moment Trump thinks about impeachment is a moment he is not thinking about doing even more reckless things, like trying to compromise the independence of the Fed, or launching a larger trade war, or stumbling into a real war.

Let me be very clear: I am suggesting that the House impeach Trump for two reasons: 1. He has committed high crimes and misdemeanors; and 2. Impeachment will distract Trump from further harming the national interest.

... Trump is not going to stop doing what he is doing, unless he gets distracted by something else. In a zero-sum world, it is far better to have him obsess about his political survival rather than, say, nuking a hurricane. In the zero-sum political world that Trump has made, impeaching him is the best possible response strategy to his abuses of power.

Posted by janinsanfran at 6:48 AM