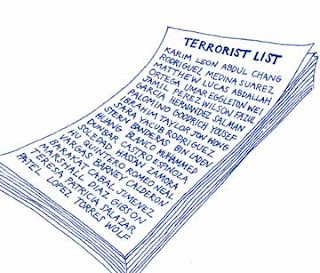 The legal system is sl-o-o-w, as Congress' attempt to get testimony from Trumpites is demonstrating.

Hundreds of government intrusions on civil liberties deriving from the U.S. "war on terror" have been litigated for nearly two decades. Just yesterday a Federal judge issued a sweeping ruling which ought to knock down one of the pillars of the panicked post-9/11 surveillance state.

ALEXANDRIA, Va. (AP) — The government's watchlist of more than 1 million people identified as "known or suspected terrorists" violates the constitutional rights of those placed on it, a federal judge ruled Wednesday.

The ruling from U.S. District Judge Anthony Trenga grants summary judgment to nearly two dozen Muslim U.S. citizens who had challenged the watchlist with the help of a Muslim civil-rights group, the Council on American-Islamic Relations.

... Gadeir Abbas, a lawyer for the plaintiffs, called the ruling a victory. He said he will be asking the judge to severely curtail how the government compiles and uses its list.
"Innocent people should be beyond the reach of the watchlist system," Abbas said. "We think that's what the Constitution requires."

Abbas said that while there has been significant litigation over the no-fly list, which forced the government to improve the process for people seeking to clear their name from the list, he said Trenga's ruling is the first to broadly attack the government's use of the watchlist. Trenga also wrote in his 31-page ruling that the case "presents unsettled issues."

Ultimately, Trenga ruled that the travel difficulties faced by plaintiffs — who say they were handcuffed at border crossings and frequently subjected to invasive secondary searches at airports — are significant, and that they have a right to due process when their constitutional rights are infringed.

He also said the concerns about erroneous placement on the list are legitimate.

CAIR's executive director Nihad Awad claims the watchlist has become "effectively a Muslim registry..." In addition to over a million foreigners who may or may not exist, the government concedes that there were 4600 U.S. citizens and lawful permanent residents who have not been charged with any crime, who had no recourse after being secretly included in the watchlist. The list has been shared throughout the government, with local law enforcement, and sometimes with private companies.

This decision should be the end of this -- but the government never gives up easily.