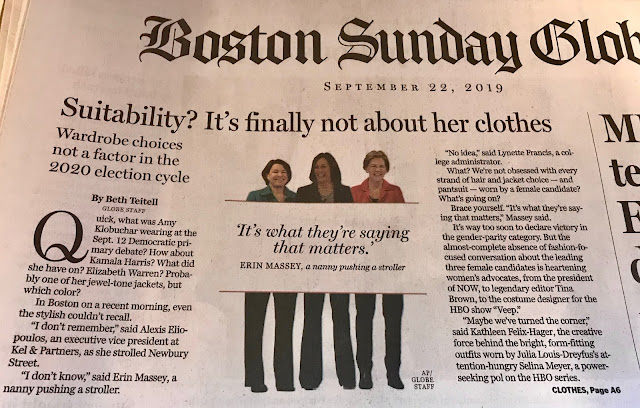 Gotta love this. The Boston Globe [paywall] has hit on one of the most heartening developments of the election season: these aspiring Democratic presidents have found a sort of business uniform that suits the work they are doing. These "uniforms" must greatly reduce the quantity of attention they have to give to dressing for daily exposure to meetings and and in front of hopeful, anxious citizens and campaign workers. Just perhaps, having solved the female clothes issues for the moment, their plans and intentions are indeed being listened to.

One of my hopes for a Democratic administration elected in 2020 is that we'll be able to stop looking at pictures of phalanxes of monochromaticly white, old men in dark suits (often ill-fitting) wearing slightly shiny white shirts (permanent press?) and slick colored ties (silk, real or synthetic). They are boring and they don't look like the people of this country. It would mean a lot to me to see federal officials who look more like all of us. They won't all be paragons of leftist virtue, but they might at least be acquainted with some regular people.
Posted by janinsanfran at 5:02 AM