E. Jean has made the horrors of #MeToo delightful; how about that?

So what did the E.P. and I do to fill the hours on the road driving across the country? Why listen to podcasts and books, naturally. E. Jean Carroll's What Do We Need Men For? had us laughing out loud for miles on end. She reads it herself; I can't imagine anyone else could perform this with such verve and appropriate emphasis.

Men have had enough nice books written about them. Not this one, Ladies.

Carroll is the longstanding advice columnist for Elle. Since I'm a feminist, leftist lesbian in good standing who lives on the West Coast, I'd never heard of her until she went on the interview circuit for this book.

Carroll is getting all sorts of notice because she included the nasty tale of how the New York City "Real Estate Tycoon" sexually assaulted her in the mid-1990s. They both ran among the fringes of the Big Apple's Beautiful People -- but the story of his pinning her against a wall and jamming his penis into her is as familiar and tawdry as male license usually is. She explains why she's never talked about this before:

Before we begin, the two great handicaps to telling you what happened to me in Bergdorf's are: A) the man I will be talking about -- not to mention his team, his lawyers, his party, his friends on Fox News, etc. -- will deny it -- as he has denied accusations of sexual misconduct made by at least sixteen credible women, namely, Jessica Leeds, Kristin Anderson, Jill Harth, Cathy Heller, Temple Taggart McDowell, Karena Virginia, Bridget Sullivan, Tasha Dixon, Mindy McGillivray, Rachel Crooks, Natasha Stoynoff, Jennifer Murphy, Jessica Drake, Ninni Laaksonen, Summer Zervos, and Cassandra Searles; and B) I run the risk of making him more popular by revealing what he did.

For all the venom there, that bitterness is in some ways the antithesis of the spirit this book.

The 75-year old E. Jean Carroll really did go on her own road trip, driving her Prius "Miss Bingley" accompanied by her dyed blue-headed poodle Lewis Carroll, visiting small U.S. towns named after women, eating in diners named after women, and asking women and a few men the book's title question: "What do we need men for?" Though many are puzzled, a goodly quantity reply with a hearty "Nothing" while sharing their pains and disappointments.

Along the way, Carroll tells her own story of growing up as a socially naive, boy-crazy cheerleader and aspiring sorority beauty queen in Indiana, and finding her way in a small town culture of groping, grasping, entitled men. When she left the rural heartland to find her fortune in the big city, she attracted the unwelcome attentions of a Mafia mobster. She also has lived a life of wide ranging accomplishment and adventure which she merely alludes to without elaboration, including supporting black activists in apartheid South Africa and trekking across Papua New Guinea.

But this book is about sharing the saga of the various Most Hideous Men of My Life. She begins:

I don't know yet which of the foul harassers, molesters, traducers, swindlers, stranglers, and no-goods will make the list, but, Ladies! I warn you. Bad fellows have done bad things to your advice columnist.

This will not be pleasant for you to read. I am sorry. But if we all just lean over and put our heads between our knees, the horrid fainting feeling will pass. No one need be carried from the room.

In fact, you might find yourself rolling on the floor, laughing.

It's obvious that in answering her readers' letters, Carroll has heard everything and enters deeply into the lives of a wide array of women. This is a wonderfully respectful book; all those journalists sent to red states to interview Trump supporters in diners could learn a lot from this old lady who so obviously relates to and cares about all sorts and conditions of U.S. women. And has, almost miraculously, figured out how to transform insult into humor. Enjoy.
...
Reading this by ear, I didn't know it was illustrated until I snagged it from the library. The print version is full of hilarious pictures of E. Jean at many ages. Here she is on this odyssey: 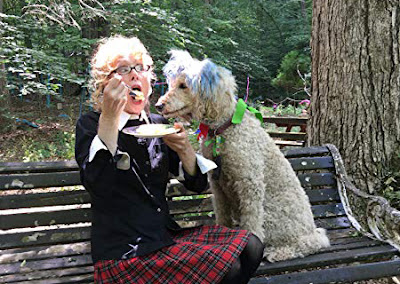 Posted by janinsanfran at 6:17 AM

Email ThisBlogThis!Share to TwitterShare to FacebookShare to Pinterest
Labels: women

I just went to the library website and put a hold on this one. I'll read it and get to see all the pictures, too. And thanks for the thoughtful comment you left on my blog. I read yours every day but rarely comment. :-)