Another "back to school" item: who receives the scholarships?

Apparently it's not even the most needy among potential athletes, those unpaid entertainers who make college sports attractive and sometimes lucrative for the schools.

I didn't know this, but I have no reason to doubt Derek Thompson:

In the 1990s, Division I and Division II colleges annually distributed less than $300 million in student-athlete scholarships. Today that figure is more than $3 billion.

You might think most of that scholarship money is going to help kids from poor families who couldn’t otherwise afford college. That’s not the case. In 2010, just 28 percent of Division I basketball players were first-generation college students, meaning they likely came from low-income families. Five years later, that figure has fallen by nine percentage points. Today, fewer than one in seven students receiving athletic scholarships across all Division I sports come from families in which neither parent went to college. ...

This process starts in youth and high-school sports. Both historically served as a pipeline to flagship universities for low-income kids. But when they’re shut out from pricey travel leagues and the expensive coaching that early specialists receive, lower-income kids are denied not only the physical benefits of playing sports, but also the jackpot that is college recruitment and Division I and II scholarships. Institutions that were meant to be opportunity-equalizers for the rich, poor, and everybody in between—community youth sports leagues, public high schools, the American college system—are being stealthily hijacked to serve the primary goal of so many high-income parents, which is to replicate their advantages in their children’s generation.

My emphasis. So even the athletic route is being closed off to young people who might benefit from college if only the money were available, somehow, to get them there. It apparently takes a college education to get a college education for many these days. 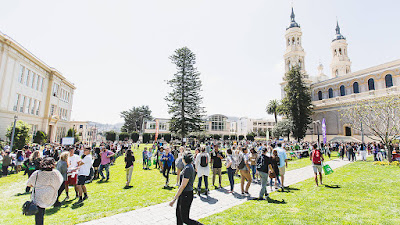 There are schools that welcome first-generation students. Erudite Partner teaches at one. The University of San Francisco claims that 36% of its students are first generation college-goers. It's also a Division I school in some sports. I don't know how their scholarship help is distributed.

E.P. taught in an introductory two week program last summer for these new scholars; she loved it because they were eager to learn and not yet just tired and looking for good grades.
Posted by janinsanfran at 7:00 AM