GOPers hope they can pull off their own local steal 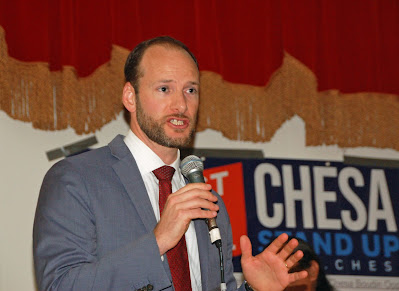 San Francisco District Attorney Chesa Boudin kicked off his campaign against the Republican attempt to recall him yesterday before a fully vaccinated crowd at the SEIU Laborers Local 87 headquarters.

The guy only took office in January 2020, just in time for the pandemic. He ran on a raft of progressive promises: to make jail time a last resort response to criminal activity; to provide support to crime victims; and to hold police and corporations accountable to the laws -- not just poor, Black, and Brown men.

Guess what? He's not God and there's still much wrong with the criminal "justice" system in San Francisco, some of it novel in the context of COVID.

But from the viewpoint of some of San Francisco's elite, Boudin wasn't supposed to win election at all. They had a candidate. San Francisco's mayor tried to fix the election by appointing her choice as "acting" before the vote. It was going to be a smooth transition -- and then this uppity public defender grabbed the imagination of an electorate seeking something new and better, and "stole" the office.

Yes, this recall is an elite version of "the Steal!"

Recall backers have rounded up some local hacks to front for them, but basically this is about Republican donors and other power players trying to oust an elected official who thinks he works for all San Franciscans, not just them.

48 Hills published a good run down of who is paying for this recall. There's plenty of national real estate developer and right wing money coming into this one, along with big sums from our local Trump-fan and arts magnate Dede Wilsey.

Boudin spoke well and forcefully at this kick-off (after all he's a trial lawyer) but I was most impressed by the breadth of the coalition represented on a wet Thursday midday. This was not only the labor unions. 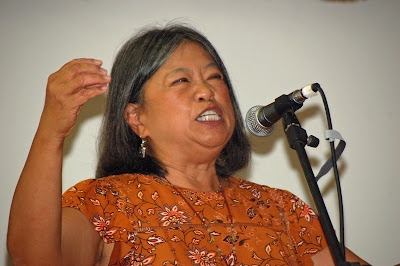 Recall proponents hope to manipulate justified fears in the Chinese and other Asian-origin communities about rising hate crimes against them. Former Supervisor Sandra Feuer is ready and eager to push back in support of Boudin's efforts to increase public safety and support for hate targets in the community she comes out of. 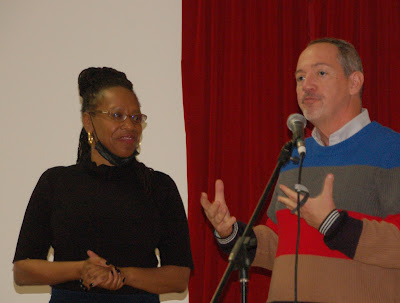 And these two, area politicos and current BART board members Lateefah Simon and Bevan Dufty, wanted this crowd to know that in the 2019 election, they'd knocked on doors for another candidate -- but they have no time for this recall. They know a genuine steal from the voters when they see one.

Boudin's original victory was narrow. He's had to try to implement changes during a pandemic which often closed down both courts and community anti-violence programs. Recall proponents have pretty much unlimited cash to throw at attacking and spreading lies about what is barely a record in office.

And who knows whether San Franciscans will be willing to turn out -- again -- in another recall election which aims to overthrow the votes they recently cast? A vote for Boudin here defends our democratic decision making.

It's going to be a tough campaign.

Posted by janinsanfran at 12:24 PM