Marion Coleman: Visions of the Past; Visions for the Future

Every phase of the re-purposing of the former U.S. Navy Shipyard at Hunters Point has been fraught. Acquired by the Navy in 1940, the prime Bay anchorage was used for repairs, as well as Cold War-era missile development and radiological research. By the time the base was closed in 1994, it had been designated a toxic Superfund site. The Navy was supposed to have cleaned up the area, but reports of radioactive hot spots continue to this day.

The city gave the contract for redevelopment to the Lennar Corporation, a Fortune 500 global construction giant, which has built over 500 new condo units. Twenty percent of these were designated for "moderate income" buyers. In May 2021, buyers won a $6.3 million settlement compensating some purchasers for loss of value as the toxicity of their location remains under study. And the struggle between Lennar and the neighborhood is by no means over.

And then there were the artists. When the Navy buildings fell vacant, some local creators saw studio space. They had a good thing going in an otherwise little used facility. Some may enjoy a future renovation.

And there was the adjoining and long suffering Bayview community, San Francisco's last surviving Black neighborhood, which launched it's own artists.

The developers have thrown Bayview's Black artists a bone. On the hillside below the condo development, there's a display of reproductions of Marion Coleman's fiber collages replicating old photos of the local community. While Walking San Francisco, I stumbled among them unexpectedly. 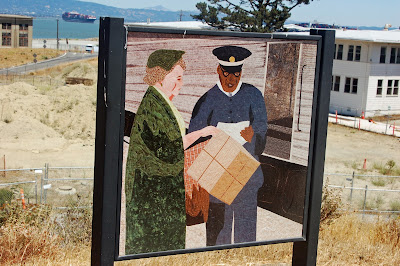 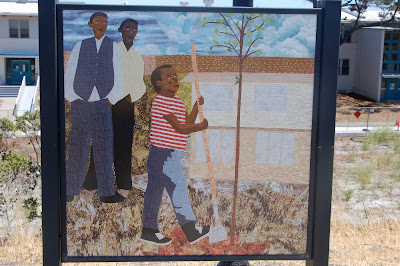 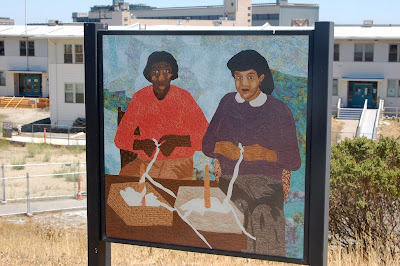 These women would have been contributing to the WWII war effort by winding bandages. Yes, women really did that, my mother among them. 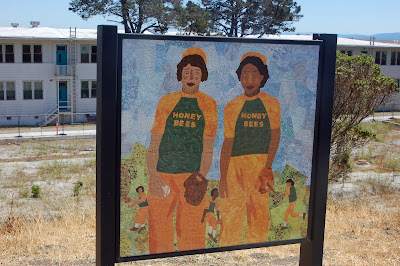 You can visit these panels any good weather day; just drive to the end of Galvez Street and walk up the hill.

Posted by janinsanfran at 10:49 AM