The best quit, but there is no alternative but to struggle on 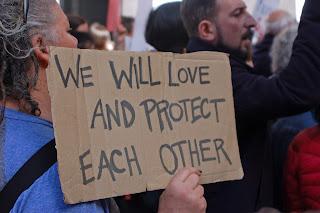 Throughout the Trump travesty, some of us wondered over and over, why didn't people working in the administration just quit when ordered to enforce bad, illegal, and cruel policies? If the federal bureaucracy and the political appointee-management ranks included many individuals of courage and conscience, we sure didn't hear from them. Mostly those who quit (or were used up and forced out) slunk shamefacedly away -- at most to follow up with self-justifying tell-all books.

Unhappily, Biden immigration policies have not changed much since the Trump era. Using the excuse of the pandemic, the administration continues to violate international and U.S. law guaranteeing migrants the right to make asylum claims. Under the law, the U.S. doesn't have to accept them all, but it has to listen to their claims, usually in the person of an immigration judge. Instead, enforcers bar international bridges. As anyone who scans newspapers or twitter knows, the Border Patrol still herds migrants like rogue cattle.

And within our borders, Martha E. Menendez, a scrappy Nevada immigration lawyer, summarizes what she is seeing:

Almost nine months into the Biden presidency, we can all see that very little has changed as far as immigration enforcement. The southern border (the Brown one, as I’ve taken to calling it) remains a humanitarian crisis of our own perpetuation; there have been no significant changes in the number of people in ICE custody, nor has there been any significant change in what their enforcement priorities even are. The enforcement guidelines that were finally released last week are so vague that our next tyrant wannabe dictator will have no problem releasing the ICE dogs on the immigrant community in full force once again. And you can trust that that tyrant is sure to come; they’re already lining up to prove who’s the most terrible, and thus the most deserving of the Republican nomination.

Sure, we'd still take Biden over Trump if that's the choice, but, as the Atlantic put it, Democrats’ Free Pass on Immigration Is Over.

Apparently some of the sort of people that Biden administration has placed in important roles dealing with immigrants and asylum seekers are made of sterner stuff than were the Trump toadies. In only nine months, there have been a couple of loud resignations:

• Daniel Foote, U.S. special envoy to Haiti, wasn't about to be the face of justifying mass deportations of desperate people to the broken country where he served.

“I will not be associated with the United States’ inhumane, counterproductive decision to deport thousands of Haitian refugees and illegal immigrants to Haiti, a country where American officials are confined to secure compounds because of the dangers posed by armed gangs in control of daily life,” Foote wrote to Secretary of State Antony Blinken.

• And now Harold Koh, an Obama-era State Department lawyer who had returned to government to serve as the top political appointee in the Office of the Legal Adviser, has quit with a blast denouncing Biden's continuation of the Trump policy of claiming under "Title 42" that the coronavirus emergency gives the government the right to ignore migrants' claims under law.

“I believe this administration’s current implementation of the Title 42 authority continues to violate our legal obligation not to expel or return . . . individuals who fear persecution, death, or torture, especially migrants fleeing from Haiti,” he wrote in the memo. ... “Nearly 700,000 people have been expelled under Title 42 since February of this year, and . . . this past August alone, 91,147 were forcibly removed,” he said, citing U.S. government statistics.

... “I ask you to do everything in your power to revise this policy, especially as it affects Haitians, into one that is worthy of this Nation we love,” Koh wrote to his colleagues.

If we elect Republicans, at this point we're accepting that our experiment in rule of law by democratic majorities is over. The rabid racist know-nothings win.

If we elect Democrats, we still get political timidity and cruelty, but the democracy -- "we the people" in the historic constitutional phrase -- gets to fight another day.

Posted by janinsanfran at 7:06 AM