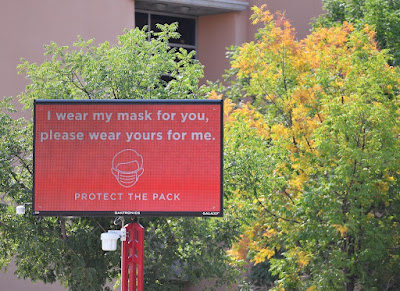 Dr. Ashish K. Jha is an internist physician and academic serving as Dean of the Brown University School of Public Health. In his role as a public commentator on the pandemic, he flies around on airplanes, probably more than most of us. He's ready for more rigor in public health regulation in the skies. He describes the situation as a conflict of rights -- one which airline employees mustn't be asked to mediate!

It's time for a vaccine mandate for air travel

... here's my story from last night that confirmed why we need it

Last night I took an overnight from LAX to Boston. I got to the gate, found myself next to a person whose mask barely covered her mouth. Mask was nowhere near her nose let alone covering it

... My flight boarded and I sat down in a window seat. She soon sat next to me. Sitting next to someone who is essentially maskless wasn't great

Truth is, if your nose isn't covered, you really aren't wearing a mask.

Flight attendant asked her to pull up her mask. She did. She chatted with me about having seen me on TV. She then volunteered she wasn't going to get the vaccine.

I tried to engage her on why. Her mask fell below her nose again. We kept chatting for a bit. I asked her nicely to pull up her mask. She got annoyed but did.

10 minutes later, it was down again. After waiting, I asked again. She glared and pulled it up.

Cabin lights dimmed. And now I couldn't see. We sat inches apart for a 5 1/2 hour flight with her variably masked. I don't love sitting next to an unvaccinated, unmasked person for hours.

Why do I care?

I'd rather not get a breakthrough infection. So I sat in my KF94, likely safe.

She was in the middle seat. Her neighbor in the aisle seat was an older man with a cloth mask. Not great.

We have very little ability to control what happens on planes. It's a place where we share the air with strangers for long periods of time. We could do stricter enforcement of masks. Flight attendants are trying but are also exhausted. Asking them to do more is not tenable.

I understand the person next to me had the freedom not to be vaccinated.

The old man next to her has the right to fly without getting infected.

Dr. Jha is not only concerned about Americans in airplanes. He also keeps an eye on the rest of the world.

India's vaccination has been on a tear

Than state of Idaho

Will soon surpass Wyoming and many other states

Despite a huge far-flung population

And a late start

Great for India...but we gotta get moving

Posted by janinsanfran at 7:23 AM

Email ThisBlogThis!Share to TwitterShare to FacebookShare to Pinterest
Labels: pandemic