Organize, struggle, and organize some more 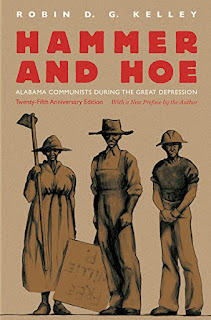 Aside from occasional great mass outpourings of raw feeling or fury -- such as, for example, the George Floyd murder protests last year -- organizing people to demand power over their own lives is hard, slow, deep work. It hurts to be powerless; why would anyone who could evade knowing their own oppression be willing to stare unflinchingly at their situation and then take action that inevitably will include some risk? It's a tough ask -- and one that no decent organizer should make without an awareness of leading some people into what will be hard for them. Union organizers know this, or learn this. So do community organizers who take on real fights. Even electoral organizers can encounter this.

At its baldest level, this is a terrible chronicle of beatings, arrests, and murders of organizers, including mostly Black local residents and some northern CPUSA members. There was a pattern: organizers would encourage people to come together for a purpose, say to demand unemployment relief, or to launch a union of share croppers or tenants, or protest violence against their community. Repression -- beatings, shootings -- by the white segregationist political authorities would follow. That reaction might even inspire mobilization for wider protests. But eventually poverty and overwhelming force would tamp down any particular manifestation of Black worker resistance. Yet large numbers of Alabamans did participate in these repeated eruptions, forming a sort of Communist-influenced "invisible army" which struggled for more respect and justice. Most Communists kept their party membership secret for their own safety -- but they were there.

What seems to have delighted Kelley is way in which Communist Marxist orthodoxy, which was a real and rigid thing in the 1930s, melded with the indigenous culture of Black resistance.  The local strike leader could very well also be the local community church elder leading services on Sunday nights. The same elder might very well be studying the revolutionary thought of Stalin and making sure the rifle he kept by his bed was ready and loaded for a visit from the Klan.

Alabama Communists followed the gyrations of the international Communist line in the 1930s, working in popular front with such reformist bourgeois outfits such as the NAACP and the Roosevelt New Deal for awhile, then drawing back during the period of the Hitler/Stalin pact, then enthusiastically joining the military when Germany invaded the Soviet Union and finally the U.S. joined the war. But these currents seemed remote to southern Communists. After all, some of the rural people they were organizing explained to themselves that these agitators must be Yankees finally come to fulfill the promise of Reconstruction.

The Party did struggle for "internal interracial democracy" -- not always successfully, but aspirationally. No other force in the south was trying as hard, or even at all, for racial equality in practice.

The Cold War of the late 1940s put an end to this bout of CPUSA organizing in the South. But the "invisible army" was still there when a less ostensibly class conscious civil rights movement against segregation and for Black voting power emerged in the 1950s. Kelley has preserved the names and stories of a generation of amazing justice warriors.

One significant quibble: it's a good thing that this book comes with a glossary of abbreviations. Kelley wrote seemingly expecting readers to be able to hold all the names of organizations which he refers to just by their initials. I certainly couldn't, especially in the audio edition.