On making a better face of the world 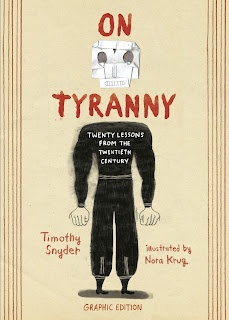 Timothy Snyder is a real deal historian. He teaches the modern history of Eastern and Central Europe at Yale and at the Institute for Human Sciences in Vienna. His Bloodlands: Europe between Hitler and Stalin is an essential text for re-including in our awareness vast parts of that continent we learned to ignore during the Cold War.
The election of Donald Trump inspired Snyder in 2017 to write On Tyranny: Twenty Lessons from the Twentieth Century, accessible reflections which might be useful in a country suddenly finding itself governed by a racist authoritarian. The book was a best seller.

In 2021, Snyder is back with a new edition, with commentary somewhat updated for a new moment of danger and hope, now illustrated by Nora Krug.  The new edition is once again a best seller on Amazon. I'm encountering it via his Substack podcast where he is reading the entries aloud. Last week Lesson 4 turned up in my email inbox.

“Take responsibility for the face of the world. The symbols of today enable the reality of tomorrow. Notice the swastikas and the other signs of hate. Do not look away, and do not get used to them. Remove them yourself and set an example for others to do so.”

Life is political, not because the world cares about how you feel, but because the world reacts to what you do. The minor choices we make are themselves a kind of vote, making it more or less likely that free and fair elections will be held in the future. In the politics of the everyday, our words and gestures, or their absence, count very much.

In conclusion, he adds that removing negative symbols -- such as monuments to Confederate generals -- is not enough.

Given this conclusion, I was a bit surprised that Snyder made no recognition that people all over this country -- most frequently in blue cities and college towns, but in corners everywhere -- have been displaying alternative signage during the last five years, repudiating encroaching fascism and offering better values. For too many observers, it has become a mark of sophistication to mock "Resistance" to Trumpism as a kind of performative self-indulgence. Do the resisters really accomplish anything? Probably both yes -- and never enough. 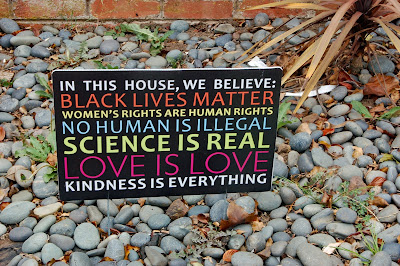 But might we not be wiser to applaud Resistance signage as an attempt to put out front alternative humane values? A decent democracy needs more than is proposed here; a fair economy that values workers would be one element of such a polity. So would a reduction of reliance on violence and the military. Not to mention stopping with the fossil fuels! But we need a starting place, and for many, this declaration provides one. 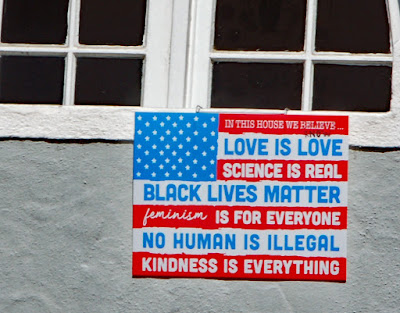 Over the last five years I have been walking and photographing every corner of San Francisco, from toney St. Francis Woods to the rundown avenues of the Bayview. Nowhere I have walked has been without this signage of hope. 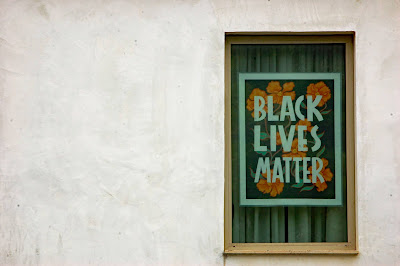 Let's not knock this performance of "resistance" -- it's a form of "taking responsibility for the face of the world." It's not enough; but it preserves and advances something precious.